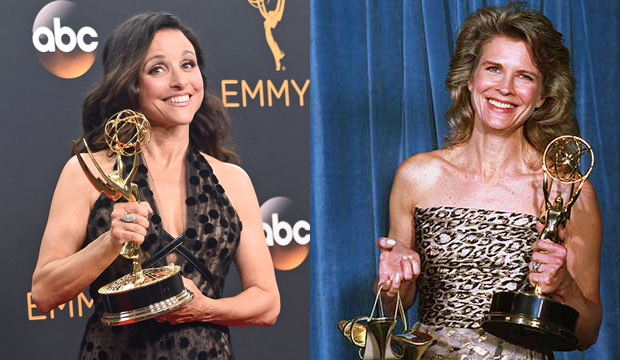 The 2018 Primetime Emmy Awards aren’t even here yet, but you have every reason to be pumped for the 2019 ceremony because it could feature a battle royale between our two Emmy queens: Julia Louis-Dreyfus and Candice Bergen.

Bergen’s five trophies for “Murphy Brown” were tied with Mary Tyler Moore‘s haul — Moore’s were for two roles on “The Dick Van Dyke Show” and “The Mary Tyler Moore Show” — for the most in the category for 21 years until Louis-Dreyfus won her sixth Best Comedy Actress Emmy in 2016. Though “Murphy Brown” didn’t end until 1998, Bergen famously removed her name from Emmy consideration after her fifth win in 1995. It’s unclear if Bergen will submit herself next year, but we hope so!

Even if Louis-Dreyfus hadn’t beaten the record, she would still have an edge over Bergen, as she won her six Emmys for “Veep” consecutively, while Bergen’s reign was interrupted twice by Kirstie Alley (“Cheers”) in 1991 and Roseanne Barr (“Roseanne”) in 1993. Louis-Dreyfus has an additional win in the category in 2006 for “The New Adventures of Old Christine,” along with a supporting statuette in 1996 for “Seinfeld” and three as a producer on three-time defending Best Comedy Series champ “Veep.” Her eight acting wins tie her with Cloris Leachman as the Emmys’ most decorated performers.

What could make this Tournament of Champions even more juicy is the prospect of four-time Best Comedy Actress winner Helen Hunt joining the fray. Hunt, who started her four-year reign after Bergen withdrew her name, and Paul Reiser are in talks for a “Mad About You” revival. “We may, we may not,” Reiser told “USA Today” at the Screen Actors Guild Awards. “We just want to make sure if we do it, we do it for the right reasons and we have a great story and a great angle that entertains us.”

Do you want to see Louis-Dreyfus and Bergen (and Hunt) face off?