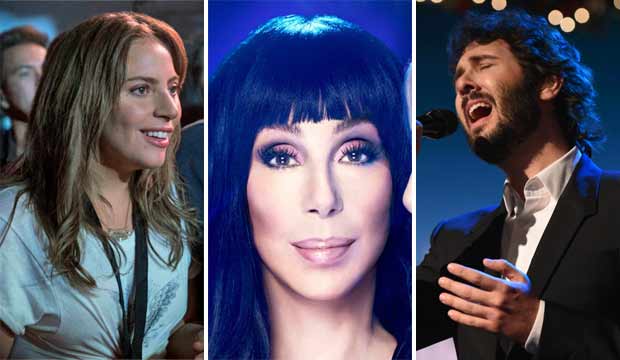 The Grammy eligibility period ended on Sunday, September 30. The nominations won’t be announced until December 5, but everything that can be nominated has already been released. And as with movie studios, which often release their most competitive films towards the end of the year to make a strong last impression on Oscar voters, there are a number of last-minute music releases that have snuck into the Grammy race right under the wire. How many of them will make the cut?

The movie musical “A Star is Born” and its soundtrack don’t drop until October 5, so they won’t be eligible until the Grammys that will be held in 2020, but Lady Gaga and Bradley Cooper released the lead single from that album, “Shallow,” on September 27, so they could make the cut at this year’s awards with that song, especially if the enthusiasm for the film carries over to the recording academy as well.

It has been 15 years since Cher has been nominated at the Grammys, and she has only ever won once: Best Dance Recording for “Believe” in 2000. But her new album of ABBA covers, “Dancing Queen,” debuted on September 28. On the heels of her supporting turn in the musical sequel “Mamma Mia! Here We Go Again,” and with “The Cher Show” soon to open on Broadway, she could have the buzz to make a Grammy comeback.

Another legend, Loretta Lynn, could return to the Grammy lineup. The country singer released her 41st album “Wouldn’t It Be Great” on September 28. It’s produced by her daughter Patsy Lynn Russell and another scion of country music royalty: John Carter Cash, the son of Johnny Cash and June Carter. Lynn has won three Grammys, plus a Lifetime Achievement Award, and she was last nominated in 2017, when she contender for Best Country Album for “Full Circle.”

Josh Groban made light of his unfortunate awards history when co-hosting the Tonys earlier this year; he has been nominated at both the Tonys and Grammys, but hasn’t won either. He has four Grammy bids to date, three of them for Best Traditional Pop Album, and he could contend again with his eighth album, “Bridges,” which was released on September 21. It’s his first album consisting of original material in five years, and Groban himself co-wrote nine of the songs.

SEEGrammy predictions 2019: Who will win Record of the Year and Song of the Year?

Five-time Grammy winner Lil Wayne has been nominated consistently since 2006, including a nom for Album of the Year in 2009 for “Tha Carter III.” He released “Tha Carter V” on September 28, so maybe this sequel will get him back into the top category, especially since the top four general-field races will have eight nominees instead of five.

Which 11th-hour contender do you think has the best chance of winning Grammys? Vote in our poll below.