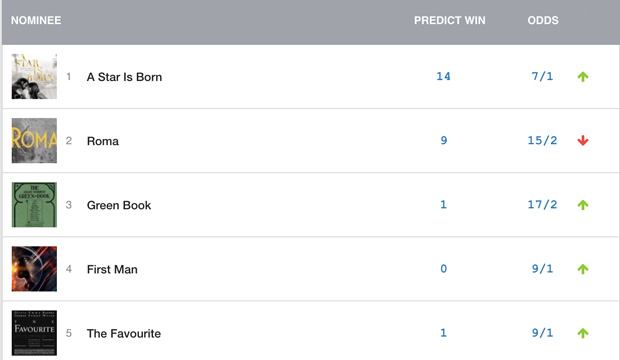 In the first week of November, “A Star is Born” has pulled ahead of “Roma” in the Best Picture race according to the predictions of the 26 Oscar Experts at Gold Derby. Bradley Cooper‘s remake of the Hollywood classic, which continues to do boffo business, now has the backing of 14 of our industry insiders (that’s up by one). Nine pundits are forecasting a win for Alfonso Cuaron‘s family drama (down by two). “Black Panther,” “The Favourite” and “Green Book” have one Oscarologist apiece in their corner.  [See the most up-to-date Best Picture rankings by our 26 Experts.]

But while “A Star is Born” now has a clear edge for first place votes from the experts, it is only just ahead of “Roma” on our Best Picture odds chart. It leads with odds of  7/1 to win the top Academy Award while “Roma” is just behind at 15/2. This discrepancy is down to the relative rankings of these two films by all of the experts, including those that don’t have them in first place. Those rankings explain why “Green Book” is up at 17/2 while “The Favourite” remains at 9/1 and “Black Panther” has fallen to odds of only 23/2. [See the latest racetrack odds.]

“A Star is Born” and “Roma” had been trading off first place since they screened at the Venice film festival. They displaced early frontrunner Spike Lee‘s “BlacKkKlansman,” which is now down in eighth place. Buoyed by its popular choice wins at the Toronto and Middleburg film festivals “Green Book” is up in third.

“First Man” has lost its first-place votes but continues to be ranked high enough that it is tied for fourth with critics darling “The Favourite.” “If Beale Street Could Talk” and “Black Panther” remain in sixth and seventh place respectively. Rounding out the top 10 are Adam McKay‘s unseen “Vice” (18/1) and Steve McQueen‘s “Widows” (25/1).