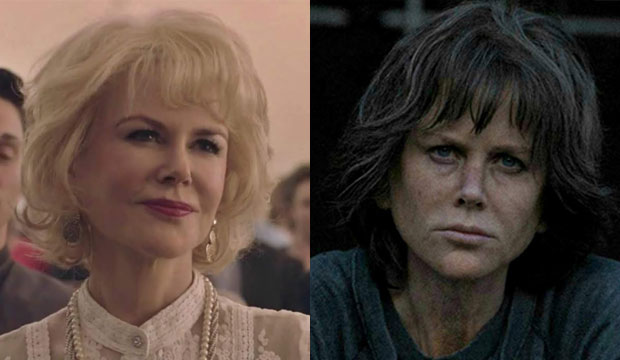 Since the introduction of the supporting categories at the 9th Oscar ceremony, 11 performers have contended in both acting categories in the same year, with seven of them prevailing in one of their races. At the 2019 Academy Awards, Oscar winner Nicole Kidman and Oscar nominee Steve Carell are hoping to make history and join this exclusive roster of double nominees.

Kidman has earned rave reviews for her turns in “Destroyer” and “Boy Erased.” The former finds her portraying a troubled Los Angeles detective, determined to bring down an old nemesis, while the latter has Kidman in a supporting turn, portraying the mother of a young man (Lucas Hedges) who is pressured into enrolling in a gay conversion therapy program. Kidman has previous Oscar nominations for “Moulin Rouge!” (2001); “The Hours” (2002); “Rabbit Hole” (2010); and “Lion” (2016), winning for “The Hours.”

Also coming on strong this Oscar season is Carell, whose lone nomination to date came for “Foxcatcher” (2014). This year, the actor and comedian has two Best Actor bids, one with “Beautiful Boy,” in which he plays the father of a young man (Timothée Chalamet) who is struggling to beat his addiction to methamphetamine. Carell also headlines “Welcome to Marwen,” in which he portrays an assault victim who constructs a miniature World War II village to assist in his recovery. Down in Best Supporting Actor, Carell could also land a nomination for his turn as former Secretary of Defense Donald Rumsfeld in “Vice.”

The first performer to ever earn double Oscar nominations was Fay Bainter, nominated in Best Actress for her portrayal of a homeless woman taken in as a housekeeper in “White Banners” (1938). While Bette Davis (“Jezebel”) triumphed in that category, Bainter scored the Best Supporting Actress prize for playing the leading lady’s aunt in the Davis picture.

Four years later, Teresa Wright also scored a pair of nominations, losing in Best Actress and prevailing in Best Supporting Actress. Her portrayal of Eleanor, wife of New York Yankee Lou Gehrig (Gary Cooper), in “The Pride of the Yankees” (1942), came up short to Greer Garson (“Mrs. Miniver”). Down in Supporting, however, Wright won the trophy for her turn as the doomed Carol Beldon in the Garson film.

In 1944, Barry Fitzgerald made Oscar history as both the first male actor to secure two Oscar nominations in the same year and the only performer to ever receive multiple nominations for the same performance. His portrayal of elder pastor Father Fitzgibbon in “Going My Way” lost to Bing Crosby (for the same picture) in Best Actor but victory came to fruition in Best Supporting Actor.

At last, in 1982, there was Jessica Lange, up in Best Actress for her portrayal of the tragic silver screen star Frances Farmer in “Frances.” While Lange came up short to Meryl Streep (“Sophie’s Choice”) in that category, she was triumphant in Best Supporting Actress for her turn as soap opera star Julie Nichols in “Tootsie.”

In 1988, for the first time in Oscar history, a performer earned two Oscar nominations, only to be shut out on the big night. While Sigourney Weaver won a pair of Golden Globes for her turns as primatologist Dian Fossey in “Gorillas in the Mist” and self-absorbed boss Katharine Parker in “Working Girl,” she was not successful in either category at the Oscars. Jodie Foster (“The Accused”) won in Best Actress, while Geena Davis (“The Accidental Tourist”) went home with the Best Supporting Actress trophy.

After six consecutive nominations and losses at the Oscars, Al Pacino finally prevailed in 1992, winning the Best Actor prize for his portrayal of the blind Lieutenant Colonel Frank Slade in “Scent of a Woman.” He was also nominated in Best Supporting Actor, his turn as deceptive salesman Ricky Roma in “Glengarry Glen Ross” recognized there. Gene Hackman (“Unforgiven”) would prevail in that category.

The following year, for the first (and to date, only) time, two performers were the recipients of a pair of nominations in a single year.

In 1993, there was Holly Hunter, who won Best Actres for her portrayal of the mute pianist Ada McGrath in “The Piano.” She was also up in Best Supporting Actress for her turn as a colorful secretary in “The Firm,” though this trophy would instead go to Hunter’s “The Piano” co-star Anna Paquin. Double nominee Emma Thompson was not successful in either category that night, losing for her work as a pre-World War II era housekeeper in “The Remains of the Day” in Best Actress and as attorney Gareth Peirce in “In the Name of the Father” in Best Supporting Actress.

Over the next decade, three actors would join this exclusive group of Oscar favorites, though only one would walk away with a trophy on the big night.

More than a decade before she won the Best Actress Oscar for “Still Alice,” Julianne Moore was a double nominee, up in that category for her portrayal of a 1950s-era housewife whose world is turned upside down in “Far from Heaven” (2002). In Best Supporting Actress, she was a nominee for her turn as another struggling housewife in “The Hours.” Alas, Moore would not triumph in either category, as her “The Hours” co-star Nicole Kidman won in Lead and Catherine Zeta-Jones (“Chicago”) was victorious in Supporting.

More successful was Jamie Foxx, who in 2004 took the awards season by storm with his acclaimed portrayal of music legend Ray Charles in “Ray.” He won the Best Actor Oscar and was also a nominee for his turn as a taxi driver taken hostage in “Collateral.” In the latter category, Morgan Freeman (“Million Dollar Baby”) was triumphant.

Most recently, Cate Blanchett received a pair of Oscar nominations, one for her reprisal of the title role in “Elizabeth: The Golden Age” and the other for her portrayal of the Bob Dylan-inspired Jude Quinn in “I’m Not There.” On Oscar night, Marion Cotillard (“La Vie en Rose”) took the Best Actress prize, with Tilda Swinton (“Michael Clayton”) winning in Best Supporting Actress.