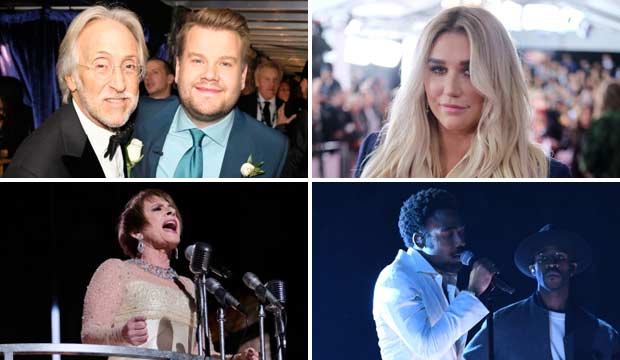 James Corden is an old hand at hosting award shows, so you feel as though you’re in good hands whenever he takes the stage. Indeed, the 2018 Grammy Awards he emceed on January 28 were his second in a row. However, 2018 Corden wasn’t as active a participant as 2017 Corden was. That’s not necessarily a bad thing; sometimes with award show hosts less is more, and when he did appear he was usually a welcome sight.

It was telling when within the first half-hour of the three-and-a-half hour event Corden had only appeared on-stage for a scant few minutes. After Kendrick Lamar‘s performance opened the show Corden forewent an ambitious production number or monologue in favor of saying just a few words to get the show underway. He joked that this was the most diverse lineup of nominees in Grammy history “and for the second year in a row the least diverse host in Grammy history.” Shortly thereafter he joked about showing Jay-Z around New York City, but his primary intention throughout the night seemed to be to keep the show moving rather than to draw attention to himself.

His few comedy bits were successful, though. He offered cute puppies as consolation prizes to Jim Gaffigan, Sarah Silverman and Jerry Seinfeld, who had just lost Best Comedy Album to Dave Chappelle. Later he chided his father for showing up late to the show because he had tickets to “Hamilton.” And two pre-taped segments were hits. In one he brought on Sting and Shaggy for a special New York City edition of “Subway Car-pool Karaoke,” which ended disastrously as the jaded NY commuters were more annoyed than amused at the impromptu underground concert. New-Yorkers-are-mean is a tired trope, but this sketch was much more knowing and affectionate; this scene was immediately recognizable to anyone who has to deal with MTA trains and buses every day.

The last sketch was also a winner, with Corden auditioning readers for a spoken-word album version of the political tell-all “Fire and Fury,” including John Legend, Cardi B, Cher and Snoop Dogg. The sketch climaxed with Hillary Clinton auditioning for audio book, but I was partial to DJ Khaled‘s moment parodying his own hyperbolic motivational enthusiasm.

But really the night was all about the performances, which typically consists of the telecast producers throwing a lot of artists at the wall and hoping something sticks. The success rate was rather high this year, though the Grammys continue to undermine themselves by trying to announce all-time classic Grammy “moments” before they’ve even happened. A few performances actually did achieve that kind of timeless quality, but as usual they didn’t always come from who you’d expect.

The best was a one-two punch of musical-theater tributes. “Dear Evan Hansen” lead actor Ben Platt — a Tony and Grammy winner — showed off a vocal range that put even Sam Smith to shame when singing “Somewhere” from “West Side Story” in honor of the late Leonard Bernstein — 2018 is the year he would have turned 100-years-old. Platt was immediately followed by Patti LuPone singing “Don’t Cry for Me Argentina” from “Evita” — for which she won her first Tony — as a celebration of Andrew Lloyd Webber. They were by far the best vocalists that took the stage at the Grammys, even though that was a high bar to clear on a night of consistently superior singing.

That said, it felt somewhat arbitrary to devote so much time to Bernstein and Webber and then give such short shrift to Chuck Berry and Fats Domino, pioneering musicians who both died in the last year. Jon Batiste and Gary Clark Jr. made the most of their brief medley of “Ain’t That a Shame” and “Maybellene,” which was one of the best, most alive performances of the night, but in comparison it felt unfairly truncated.

Another great vocal performance came from Childish Gambino — aka “Atlanta” creator and star Donald Glover. Instead of performing the song he had just won a Grammy for, “Redbone,” he performed “Terrified,” and even having already listened to his album “Awaken, My Love” I was taken aback by his vocal control, his range, his passion, and his falsetto. Similarly, I keep forgetting how good a pure vocalist Lady Gaga is amid her flamboyant public persona, and her medley of “Joanne” and “Million Reasons” was another demonstration of that.

There were also dynamite performances by Pink (“Wild Hearts Can’t Be Broken”); Logic, Alessia Cara and Khalid (“1-800-273-8255”); and Chris Stapleton with Emmylou Harris (Tom Petty’s “Wildflowers”). But another one of the best moments on the Grammy stage wasn’t one of the best sung, per se. Kesha is a powerful singer, but her nominated anthem “Praying” is a demanding song. She seemed to struggle to wrangle her vocal chords on this occasion, but the raw emotion that fueled her deeply personal delivery — not to mention the musical and emotional support of other female artists on stage with her including Camila Cabello, Cyndi Lauper and Andra Day — made for one of the most powerful and nakedly vulnerable moments of the telecast.

SEEGrammys 2018: Will more hip-hop artists boycott after yet another rap shutout in the general field?

What did you think of the 2018 Grammy Awards show? Comment below, and vote in our poll to let us know what your favorite performance of the night was.