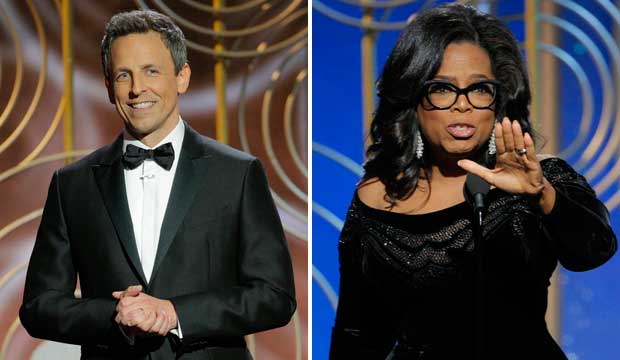 “A special hello to hosts of other upcoming awards shows, who are watching me tonight like the first dog they shot into outer space,” noted Seth Meyers during his opening monologue as host of the 75th Golden Globe Awards. Indeed, all eyes were on Meyers as he presided over the first major televised awards show since the revelations of widespread sexual harassment shook Hollywood during 2017. But even with Meyers’s knockout performance as host, it was the issue of sexual harassment in the workplace that took center stage in the first awards show of 2018. Check out the complete list of winners here.

Meyers’s monologue was staggering in its ability to not only be funny, but to tackle the 800-lb male elephants in the room — Kevin Spacey, Woody Allen, and Harvey Weinstein taking the brunt of the punishment — while still keeping the atmosphere jovial. Even when Meyers went for the jugular — an “In Memoriam” joke aimed at Weinstein earned some rather vociferous groans — he always managed to keep the audience on his side. One particularly inspired bit involved Meyers simply mentioning “The Post,” its director Steven Spielberg, and stars Tom Hanks and Meryl Streep, followed by someone bringing an armful of Golden Globes onstage. The bit had all three stars in the audience visibly in stitches. Meyers even brilliantly recreated the “Jokes Seth Can’t Tell” segment from his late-night show with the help of several nominees, including Jessica Chastain, Issa Rae, and unsurprisingly Amy Poehler, who reminded audiences of how she makes every awards show better.

Meyers also took a serious moment to mention the “Time’s Up” movement, formed in response to the harassment and silencing of women in Hollywood. Taking a preemptive strike against a very likely criticism from frequent Meyers-target Donald Trump, the comedian mentioned the fact that many of the Hollywood jobs are actually held by behind-the-scenes technicians rather than the so-called “Hollywood elite.” He then pointed out that it is axiomatic that women have been forced to work harder than men in order to achieve.

If there was anything to criticize about Meyers, it was his scarceness throughout the rest of the evening. After that killer monologue, we saw very little of Meyers throughout the rest of the show. But then again, pacing has never been a strong aspect of the Golden Globes. I mean, whose decision was it to give out a series award BEFORE you give out all of the acting prizes? And as a result, the show was clearly running long, as noted by the complete absence of presenter banter as the evening rolled on, to the point that a potentially inspired pairing of Amy Poehler and Andy Samberg gave us nothing. Perhaps the Globes could mitigate that problem by having television nominees closer to the stage, so that we aren’t subjected to minute after minute of them just trying to navigate the maze of tables.

The “Time’s Up” movement was clearly on the minds of many in attendance at the Globes—not just based on the predominance of black among the wardrobe, but also based on the winners’ speeches, many of which made direct mention of the controversy, including “Big Little Lies” stars Nicole Kidman and Laura Dern and star/producer Reese Witherspoon. Allison Janney gave one of the most touching and authentic speeches of the night. Accepting her Best Supporting Actress prize for playing figure skater Tonya Harding’s cruel mother in “I, Tonya,” Janney gave a rapid-fire acceptance speech, paying tribute to Harding (who was in the audience) and calling out disenfranchisement, not only in terms of gender, but also class.

And if anyone tonight aced their “Oscar audition speech,” it was clearly Frances McDormand (“Three Billboards Outside Ebbing, Missouri”) who claimed her first career Golden Globe. After offering a round of tequila to her fellow nominees, McDormand gave a funny and poignant speech that celebrated not only her collaborators, but her delight in her film’s ability to bring moviegoers to actual theaters. She ended her speech with a bang by pointing out the “tectonic shift” in the power structure of Hollywood, and that women were not there simply for the food, but for the work.

But leave it to Oprah Winfrey to really bring the evening to its zenith. Accepting the Cecil B DeMille Award, Winfrey gave an emotional, heartfelt speech that brought the audience to its feet not once, but twice. Was it a preachy speech? Yes. However, more than anything it was a speech that celebrated racial diversity with a mention of Sidney Poitier’s groundbreaking Oscar win, and an acknowledgement that Winfrey’s status as the first black woman to win the DeMille Award might serve as an inspiration for young girls of color. But Winfrey’s speech took the “Time’s Up” and #MeToo movements out of Hollywood and connected it to women in all walks of life — from every race, class, religion, and political ideology. After Meryl Streep’s epic DeMille acceptance speech last year and now Winfrey’s, next year’s recipient had better take some careful notes.