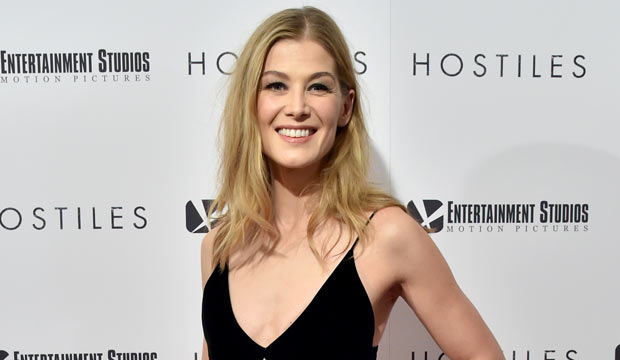 “Gone Girl” was treated rather harshly at the 2015 Academy Awards. Despite being of the most popular and well-reviewed films of the year, David Fincher‘s movie came away with just one Oscar nomination: Best Actress for Rosamund Pike. Pike was, frankly, terrifying, as Amy Dunne. She hasn’t featured in an awards race since that film, despite respected turns in “A United Kingdom,” “The Man With the Iron Heart” and “Hostiles.” She must, surely, join the Best Actress race once again for her portrayal of war reporter Marie Colvin in “A Private War.”

The Aviron Pictures film is directed by Matthew Heineman, who was Oscar-nominated alongside Tom Yellin in 2016 for Best Documentary for “Cartel Land.” This is his first feature film after a career full of documentaries. “A Private War” is a docudrama, much like “Zero Dark Thirty.” Indeed, the journalistic nature of his documentaries clearly helps here to tell the story of one of the most famous journalists of all time. The film follows this official synopsis: “One of the most celebrated war correspondents of our time, Marie Colvin is an utterly fearless and rebellious spirit, driven to the frontline of conflicts across the globe to give voice to the voiceless.”

Pike delivers an Oscar-worthy performance, ticking off several boxes often needed to contend. Firstly, this is a transformative role. She swaps her smooth, silky, straight blonde hair for a head full of muted blonde-come-grey wild curls. She also sports an eye-patch for the majority of the movie. It’s a very memorable look and even when she loses the eye patch, Pike is even more unrecognizable. Her scarred eye droops, covered by a collapsed eye-lid.

The accent, by the way, is perfect. Pike hails from London and the Queens accent she adopts to portray Colvin is spot on. The film is book-ended by a voice-over that turns out to be the real Marie Colvin. Pike’s accent is so good that you can’t tell the difference between her speaking and Colvin speaking.

Pike also plays a real-life person, which, as we know, is one of the most common ways to earn some awards attention. Meryl Streep (Katherine Graham – “The Post”), Margot Robbie (Tonya Harding – “I, Tonya”), Natalie Portman (Jacqueline Kennedy – “Jackie”), Streep again (Florence Foster Jenkins – “Florence Foster Jenkins”) and Felicity Jones (Jane Hawking – “The Theory of Everything”) are just the most recent of a long line.

Pike plays a woman who is hailed as a hero by anyone who knows her story. Her bravery, her commitment and her ability were all revolutionary to the reporting on wars and conflicts. Voters may wish to pay tribute to such an inspiring legend as Colvin by rewarding the actress who so ably plays her.

The academy loves big and bold acting – and Pike has plenty of crying scenes, plenty of breakdowns as Colvin struggles with alcoholism and PTSD, and plenty of passionate moments filled with anger, sadness, determination and self-destructiveness.