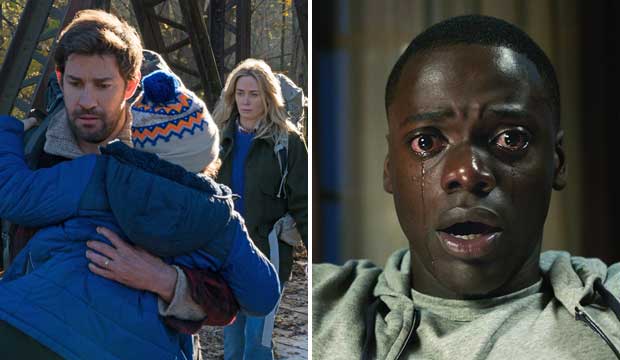 It’s still only the spring, but might we already have another year-end awards contender on our hands? “A Quiet Place” opened on April 6 to rave reviews, and it has now topped the box office with $50 million dollars in its opening weekend against a mere $17 million budget. And it bears a few striking similarities to another horror movie that earned plaudits from the academy, “Get Out.”

The stories of the two films don’t have much in common besides sharing the horror genre. “Get Out” was an allegory about racism in America, while “A Quiet Place” is about a family that lives in silence to escape the detection of creatures that hunt by sound. But there are eerie parallels behind the scenes. Both films were similarly acclaimed: “A Quiet Place” scored 82 on MetaCritic and 97% fresh on Rotten Tomatoes, while “Get Out” rated 84 on MetaCritic and 99% fresh on Rotten Tomatoes. And they both made tons of money against relatively small budgets.

Then there are the filmmakers. “Get Out” was written and directed by Jordan Peele, who had best been known for acting in a TV comedy (“Key and Peele”). And “A Quiet Place” is co-written and directed by John Krasinski, who was also best known for acting in a TV comedy (“The Office”). This is actually Krasinski’s third feature film as a director. He made his debut behind the camera with the 2009 indie comedy “Brief Interviews with Hideous Men,” which competed that year at the Cannes Film Festival. He followed that up in 2016 with another comedy, “The Hollars,” in which he co-starred with Margo Martindale, Richard Jenkins and Anna Kendrick.

So a horror movie like “A Quiet Place,” which co-stars his real-life wife Emily Blunt, is a marked departure for Krasinski, but perhaps it’s the genre he was always meant to direct. It’s by far his most acclaimed film, and after just three days it’s already his biggest moneymaker. Do you think he’ll be remembered when the Oscars roll around like Peele was for “Get Out”? Vote in our poll below to let us know.