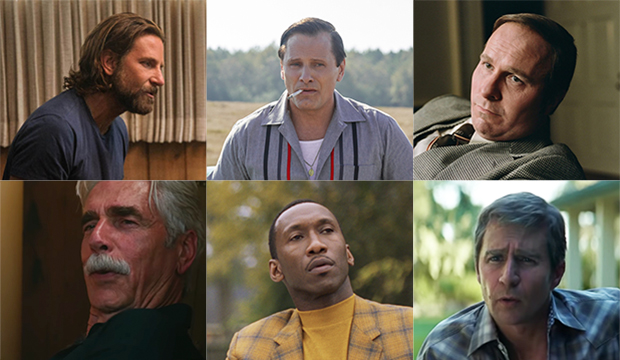 Our predicted Best Actor and Best Supporting Actor Oscar nominee lineups cover 10 people (obviously), but only across seven films. Three films — “A Star Is Born,” “Green Book” and “Vice” — are expected to nab nominations in both categories, and wins for any of the pairs of co-stars would put their picture in elite company.

Only five films have won both male acting categories:

SEE Can Bradley Cooper (‘A Star Is Born’) become the latest actor to receive an Oscar nomination for directing?

“A Star Is Born” is fielding Bradley Cooper in lead and Sam Elliott in supporting. “Green Book” has Viggo Mortensen in lead and Mahershala Ali in supporting, though Universal could’ve definitely pushed both lead. And Christian Bale is in lead for “Vice,” with Sam Rockwell in supporting.

At the moment, none of these three films is expected to sweep the actor races, but two of them are predicted to walk away with one statuette — and their stars are in the same spots in both rankings. Cooper is in first place in our Best Actor odds, followed by Bale, Mortensen, Ryan Gosling (“First Man”) and Rami Malek (“Bohemian Rhapsody”). Ali has recently surged out front in Best Supporting Actor, ahead of Timothee Chalamet (“Beautiful Boy”), Elliott, Richard E. Grant (“Can You Ever Forgive Me?”) and Rockwell.

With “Vice” largely unseen, if one of them does pull off the actor double right now, it might be “Green Book.” Cooper could potentially win Oscars in three other categories (Best Picture, Best Director, Best Adapted Screenplay), while this is Mortensen’s single play. The feel-good movie is a two-hander between Mortensen and Ali, who spend almost two hours playing off of each other. “A Star Is Born”‘s main duo is, of course Jackson (Cooper) and Ally (Lady Gaga), and Elliott has brief screen time in the film. Short screen time is not the be-all, end-all (Beatrice Straight says hi), but it doesn’t help if one of your top competitors is basically a co-lead. But Elliott does have the “unrewarded veteran” angle in his favor against the last two winners in the category.