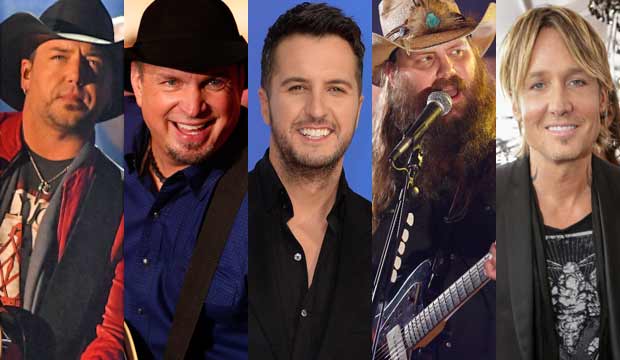 “And here are the all-male nominees,” said Golden Globes presenter Natalie Portman, calling out those awards for their lack of female representation after they snubbed a number of worthy women for Best Director. Then the Grammys were accused of sexism to the point that the recording academy has convened a task force on inclusion. But alas, the Academy of Country Music is still a boys’ club despite months of #MeToo. so here are the all-male nominees for Entertainer of the Year: Jason Aldean, Garth Brooks, Luke Bryan, Chris Stapleton and Keith Urban.

In 2017 Carrie Underwood was nominated for Entertainer of the Year, and she had won that award twice before (2009-2010), but she was the only woman represented in that lineup, which is par for the course. Since 2000 there has only been one year when women were in the majority: 2000, when Dixie Chicks, Faith Hill and Shania Twain were all up for the top award. Since then there have never been more than two female nominees in any given year, and there was a significant length of time when there were hardly any female nominees at all: in the span from 2002 to 2008 there was remarkably only one nomination for a female act (Dixie Chicks in 2003).

So it’s no wonder that over the 47 years that the ACM Awards have given out Entertainer of the Year, female artists have only won 10 times:

The consecutive wins for Underwood and Swift came over the eight-year period when the winner in that category was decided by fans, so it’s hard to say whether those races would still have had the same result if they had been decided by the academy.

This year the most nominated artists are also men: Stapleton with eight, followed by Thomas Rhett with six and Urban and songwriter Shane McAnally with five apiece. The two most nominated women are Miranda Lambert and Maren Morris, who have four each, but that’s still significantly more than the other three Entertainer of the Year contenders. Aldean’s only other nomination is for Male Vocalist of the Year, while Brooks and Bryan have no other nominations at all.

So what gives? How can women so often have some of the best albums, best songs, best videos and be the best vocalists without being among the best entertainers?