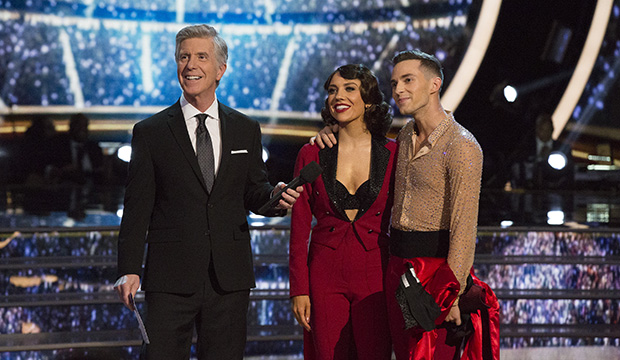 The first five are all Olympic gold medalists, with three of them — Ohno, Yamaguchi and Davis — Winter Olympians like Rippon, and the other two, Johnson and Hernandez, Summer Olympians. Davis is a close friend of Rippon’s who mentored him and fellow figure skater Mirai Nagasu this season.

Rippon made his first — and last — Olympic team on his third attempt this year, winning a bronze in the figure skating team event with Nagasu. At 28, he was the oldest singles skater to make his Olympic debut in 82 years.

SEE Did Adam Rippon deserve to win ‘Dancing with the Stars: Athletes’?

Interestingly, the Winter Olympians are all skaters in some way and the Summer Olympians are both gymnasts, so the marquee events of each Olympics — figure skating and gymnastics — are well represented on “Dancing.” Only Ohno, a short track speed skater, is the outlier with a niche sport he brought to the masses at the 2002 Winter Olympics.

All six champs were favorites from the beginning of their respective seasons, with the tightest finishes arguably between Ohno and Joey Fatone, and Johnson and Gilles Marini. Johnson beat Marini by less than 1 percent, the closest margin in the show’s history. She later finished second to Melissa Rycroft on the all-stars season.

Which of these Olympic “Dancing” champs is your favorite?

Carrie Ann Inaba 'cried' over Tom Bergeron's and Erin Andrews' 'Dancing with the Stars' firings: 'My…