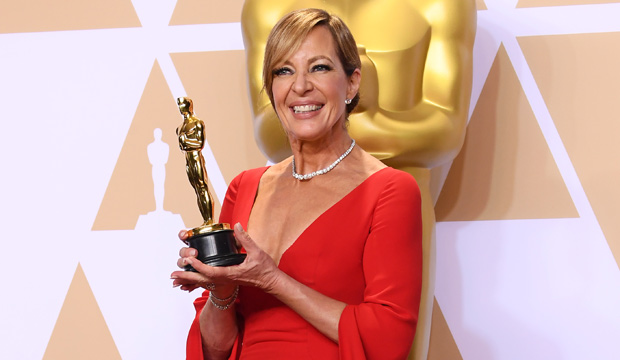 Tonya Harding and the real LaVona Golden may be estranged, but the same can’t be said for the figure skater and her movie mom: “I, Tonya” star Allison Janney will be front row and center to root on Harding on “Dancing with the Stars: Athletes.”

“Allison is coming for the first show,” Harding revealed to “Entertainment Tonight.” As for Margot Robbie, who played Harding in the dark comedy, the Oscar nominee is currently out of town. “When she comes back, if we are still in the competition, she’s going to come too,” Harding said.

SEE Tonya Harding and Sasha Farber want Margot Robbie and Allison Janney in their ‘Dancing with the Stars: Athletes’ routines

Harding and her partner Sasha Farber previously joked about having Janney and Robbie in their dances, but having an Oscar winner cheer you on works just as well. Here’s hoping Janney brings her trophy and Little Man.

The former Olympian hopes to impress Janney and viewers, but she says she’s most concerned about doing the best for herself and Farber. She calls “Dancing” her “second chance” after having “lost myself over the years.”

“When I got that call [to do the show], I started crying,” she said. “And Sasha’s so great, he puts up with me. I know that there are people out there who don’t like me and that’s OK, but I’m here to try to do the best I can for myself and my partner.”

'The West Wing' reunion on HBO Max: What are the political show's 20 greatest episodes, ranked worst to…

Who'll get the MOST Emmy noms for acting? Allison Janney, Tiffany Haddish and others on the ballots 4 or…