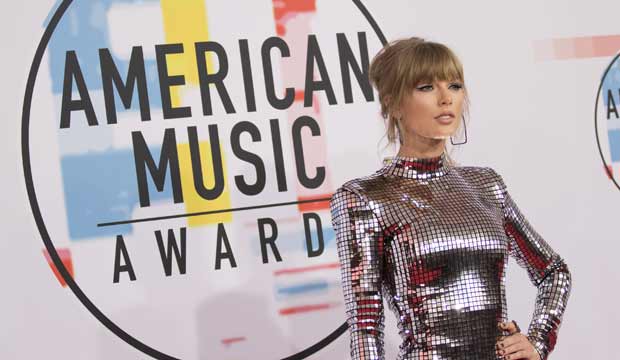 Taylor Swift claimed Artist of the Year at the 2018 American Music Awards, which set two records for the price of one. With four victories in the top contest she extends her record for the most wins in that category, and she also broke Whitney Houston‘s record for the most all-time victories by a female artist. Not bad for a 28-year-old. Check out the complete list of AMA winners here.

Three of Swift’s categories were presented during the jam-packed telecast, and she won all of them: in addition to Artist of the Year, she took home Favorite Pop/Rock Album for “Reputation” and Tour of the Year for her “Reputation Stadium Tour.” That brought her from a career total of 19 AMAs to 22, overtaking Houston’s 21. And Swift also won an award that wasn’t presented during the show: Favorite Pop/Rock Female Artist, bringing her all-time haul to 23.

But Swift wasn’t the only musician with reason to celebrate. Camila Cabello claimed both of her two categories handed out during the ceremony: New Artist of the Year and Favorite Pop/Rock Song for “Havana” featuring Young Thug. These are her first victories as a solo artist after previously winning Collaboration of the Year with her girl group Fifth Harmony in 2016 for “Work from Home” featuring Ty Dolla $ign.

Interestingly, Young Thug wasn’t the only hip-hop artist to win in the pop/rock categories. It looks like rap is the new pop thanks to surprise victories for Post Malone (Favorite Pop/Rock Male Artist) and Migos (Favorite Pop/Rock Duo or Group). Meanwhile, in the actual hip-hop categories Cardi B claimed Favorite Rap/Hip-Hop Artist over Drake, who was tied with her as the most nominated artist of the night.

Making history in the country categories, Kane Brown upset Luke Bryan and Thomas Rhett to claim Favorite Country Male Artist. That made him the first person of color to win that prize since Charley Pride (1974, 1977).