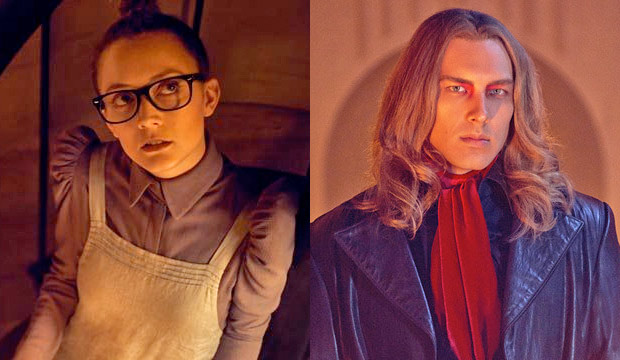 The eighth installment of FX’s “American Horror Story” franchise concluded Wednesday, November 14 with a timey-wimey episode that resulted in several shocking deaths and a brand new timeline. Former series regulars Angela Bassett (as Marie Laveau) and Jessica Lange (as Constance Langdon) returned to close out “AHS: Apocalypse,” which ended with Billie Lourd‘s young witch Mallory going back in time and killing Michael (Cody Fern) before he could become the antichrist. Let us know what you thought of the Season 8 finale by voting in our poll below.

After being born in the “Murder House” as a product of Rubber Man (Evan Peters) and Vivien Harmon (Connie Britton), Michael grew up to be the antichrist with superhuman powers. But in the new timeline that was established in the finale, Michael was killed in 2015 after Mallory ran him down with her car. Michael died in Constance’s arms on the street after she made the decision not to let him perish inside the ghostly Murder House.

Following Michael’s death, Mallory then joined Miss Robichaux’s Academy where she came face-to-face with the witches who in this timeline were still alive and well, including Cordelia Goode (Sarah Paulson) and Zoe Benson (Taissa Farmiga). She also met Queenie (Gabourey Sidibe) for the first time and convinced her not to stay at the Hotel Cortez, thereby re-writing history again and preventing her from being murdered in “AHS: Hotel.”

By changing history, Mallory may have saved all of humanity but the threat of the antichrist is still out there. “American Horror Story: Apocalypse” ended in a mirror image to “American Horror Story: Murder House,” with a young child relishing in the fact that he just murdered his nanny. This time around the antichrist was born to Timothy (Kyle Allen) and Emily (Ash Santos), star-crossed lovers who originally died in Outpost 3 before Mallory altered the timeline.

Now that Season 8 is a thing of the past, it’s time to tell us what you thought of the finale by voting in our poll below. The episode, titled “Apocalypse Then,” was written by Ryan Murphy & Brad Falchuk and directed by Bradley Buecker. “AHS” has already been renewed for Seasons 9 and 10, due out in 2019 and 2020.