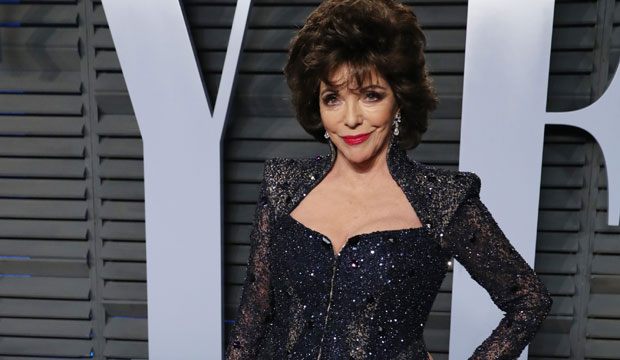 Joan Collins just landed the juiciest role of her career since she played scheming Alexis on “Dynasty” in the 1980s. On April 6, Ryan Murphy confirmed that he has cast her in season 8 of “American Horror Story.” She is to play the grandmother of Evan Peters‘ character, a comedic hairstylist.

Over its first seven seasons, this FX franchise has showcased other Hollywood veterans. Perhaps Murphy had one-time “AHS” leading lady Jessica Lange in mind when he created this new character. She picked up two Emmys for her work on this series including the first season, 2011’s “American Horror Story: Murder House,” in which she played Peters’ mother. It is easy to imagine that the double Oscar champ was not interested in returning to the franchise to be, gasp, his on-screen grandmother.

Lange’s other Emmy win came for season three, “American Horror Story: Coven,” in which she played the most powerful witch of her generation. That certainly describes Alexis, Collins’ character on the prime-time soap “Dynasty.” The English actress joined the show in season two and bolstered the ratings with her delicious delivery of lines. Her on-going feud with Krystle (Linda Evans) for the love of Blake (John Forsyth) kept the show going for eight more seasons, with one of those (season 5) at #1 in the Neilsen’s.

SEE ‘American Horror Story’: Which was the scariest season of ‘AHS’? [POLL]

Collins only reaped one Emmy bid for her over-the-top performance. She contended in 1984, losing the Best Drama Actress race to Tyne Daly, who picked up the second of her eventual four Emmys for “Cagney & Lacey.”

Her fiercest rival for an Emmy this time around could be Oscar winner Kathy Bates, who is returning to the “AHS” franchise after a year off. She made her debut in the franchise in season three and won an Emmy for her efforts. She went on to headline seasons four through six but other commitments kept her from appearing in season seven, “American Horror Story: Cult,” which aired last fall and focused on the 2016 election. That is the one that TV academy voters will be considering this summer. The first six seasons of “AHS” reaped 81 Emmy nominations and 15 wins.