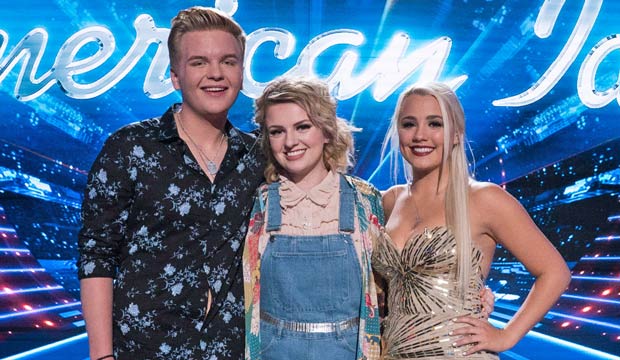 The May 20 episode of the ABC revival of “American Idol” will see the Top 3 perform three songs apiece in the hopes of winning season 16. Gabby Barrett, Caleb Lee Hutchinson and Maddie Poppe will start off the two-hour live telecast with a number dedicated to their respective childhood hometowns. Each of them will then reprise one of their songs from a previous episode. And they will conclude the evening with the debuts of their respective winner’s singles.

As with the previous three episodes of “American Idol,” this one is airing live nationwide. Voting begins at the start of the broadcast on Sunday and continues until early Monday morning. Viewers can cast votes for their favorites by three different methods: by app, online or via text. For those on the west coast who don’t want to watch live, the show will be repeated in its usual 8 p.m. time slot and they will still have time to vote.

This talented trio got to this stage of the competition by winning enough votes on May 13. That Top 5 show saw the surprise elimination of Cade Foehner as well as Michael J. Woodard. Below, follow along with all the action on the May 20 episode of “American Idol.”

SEE ‘American Idol’ final: How to vote for the season 16 winner

8:00 p.m. – Caleb, Gabby or Maddie? Who will be named “American Idol”? There is one more night of performances before we learn the results on Tuesday, May 21. The classic reality TV show was revived by ABC this year and two country singers and an independent Indie/pop artist are battling to become the 16th title holder. Let’s get started!

8:10 p.m. – Caleb is up first. He’s lost 85 pounds and he has gone through a physical and emotional transformation throughout the season. Caleb knows this competition won’t be handed to him, so he’s kicking things off with his new single “Johnny Cash Heart.” He screwed up the intro to the song, but let me share a secret: Audiences at home don’t care about that! He recovered fine and what’s most important is that the shaky beginning didn’t throw him completely off the rails. The song itself is pretty boring. It’s not what I had hoped for in his debut single. Lionel said “Welcome to the business.” Katy felt like it was Caleb’s weakest performance to date. That’s not what someone wants to hear at the finale. Ouch!

8:20 p.m. – The music continues with a new single from Gabby. When asked if she is going to win, Gabby said she is capable. It takes more confidence than that! Gabby is insecure that people think she’s trying to sound like Carrie Underwood. Since her audition, she’s been trying to distance herself from the “Idol” legend. Her new single is called “River Deep” and it’s about as generic as Caleb’s. I’m not sure who they enlisted to write the Season 16 singles, but they’re never going to be hits. If this series wants to launch a superstar they need to invest in the best songwriters. They have failed to do that. The judges clearly prefer her to Caleb, but does the audience? Lionel seems to be the only judge who recognizes her single is a total bust.

8:35 p.m. – Maddie is last to perform her debut single. It’s called “Going Going Gone” and was co-written by Julia Michaels. Of the three singles thus far, this is the best. It has a clear hook and is the most radio-ready. Maddie is relaxed on stage and although I’m not blown away by this song, it’s the best of the three. Luke said Maddie looks the most comfortable on stage, which allowed him to relax while watching her. Katy said Maddie has one of the better songs, but is clearly underwhelmed by all of them, as am I.

8:45 p.m. – For the second round the contestants will sing their most memorable songs of the season. Caleb is first with “Don’t Close Your Eyes.” This song showcases Caleb’s voice so much better than his original single we heard earlier. This song actually has a melody. Lionel said Caleb’s voice is his stamp of approval. Katy said it was light year’s difference from his last song, and maintain’s that his first song was dreadful.

8:55 p.m. – Gabby is up next with an encore performance of one of her best of the season, “Little Red Wagon.” This song allows Gabby to prove she is a true performer and work the stage. She nailed it for a second time, but I have to say I enjoyed her prior performance of this song. Katy disagrees with me and thinks Gabby has grown since the last song. Luke feels like the contestants have tightened up on this finale (I agree). Lionel said Gabby owns the stage and is “selling her goods.”

9:05 p.m. – Maddie continued the competition with her original song ” Don’t Ever Let Your Children Grow Up.” It’s great to see an artist who is able to create a hook on her own, but I’m still underwhelmed by this entire finale. This indie/pop vibe is cute but it’s not enough to “wow” me for someone competing for the title. Katy loved that Maddie took a risk and showed off the many layers to her artistry.

9:10 p.m. – Katy said the first round was a disaster but Maddie was the best. Caleb won round two. She’s looking for Gabby to step up in round three. I can’t remember a more low-key, boring finale ever. Does anyone want to win?

9:35 p.m. – After 90 minutes of the most boring “American Idol” finale I have ever witnessed, Caleb stepped up on stage to sing a country classic, “Folsom Prison Blues” by Johnny Cash. As his final song of the night, I have to commend the youngster for his showmanship on this performance. Did I feel like he was “in it to win it?” No, not really. But it was by far his best performance of the night. In fact, it was his only entertaining performance of the night. Katy said, “audience members want to have fun, they’re just waiting for you to invite them.” I think that perfectly sums up the night. I give Caleb a 5/10 for the night.

9:45 p.m. – Gabby is singing “Don’t Stop Believin'” by Journey for her final performance. This could have been an epic performance, but Gabby is treating it like a victory lap. It’s paint-by-the-numbers and completely average. Katy is on her feet trying to feel something before Luke and Lionel join her. Where was the power? Where was the soul? I thought it was average, but Steve Perry happened to be in the audience and called it “amazing” which will give Gabby major bonus points. He called it “the most amazing version he’s ever heard.”

9:59 p.m. – Maddie closed out the show with “Landslide” by Fleetwood Mac. I’ve been waiting all night for someone to do something that moved me and I think Maddie finally accomplished that. Standing solo on the stage with her guitar in hand, Maddie flawlessly sang the touching lyrics to this classic and won me over. This finale was incredibly underwhelming overall, but Maddie’s final performance won the night. Even Katy said, “I’m voting for you,” before Seacrest closed the show. Who is the next “American Idol”? I hope Maddie takes the crown, but Gabby and Caleb are equally formidable. We will find out on Monday, May 21 on ABC!