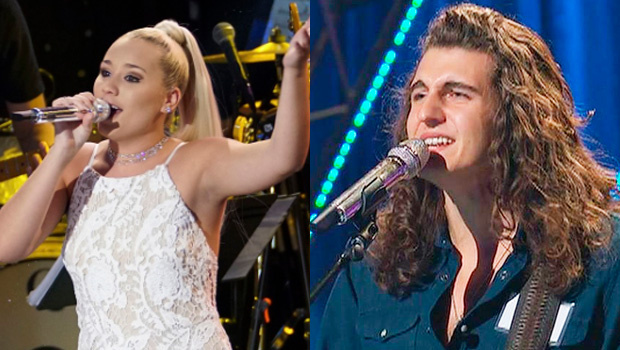 The Top 10 finalists still in contention to win Season 16 of “American Idol” were revealed on Monday, April 23 and that means it’s time to kick off our weekly power rankings! Six artists advanced by earning enough votes from viewers at home while four more were saved by judges Katy Perry, Lionel Richie and Luke Bryan. On Sunday, April 29 the Top 10 will perform Disney songs hoping to survive the three-person cut.

So who emerged as the season’s first bona fide front-runner? And which artists seem to be at risk of having their season cut short?  Below is our Top 10 power rankings based on the first week of live performances. Do you agree with our assessment so far? Sound off in the comments and let us know who your favorites are by voting in our poll and making predictions.

SEE ‘American Idol’ Top 10: How to vote for your favorite artist of Season 16 on ABC

1. Gabby Barrett (Age: 17; Pittsburgh, PA)
After coasting through the preliminary rounds of auditions Gabby launched herself into the forefront of Season 16 by closing out the first live episode with Miley Cyrus’ “The Climb.” It was arguably her best performance to date and following her powerhouse vocal Katy proclaimed that Gabby had gone through the “star wash.” She followed it up by giving the best performance during the following night’s results episode. Gabby blew the judges away with a scorching version of Miranda Lambert’s “Little Red Wagon.” That, paired with her likeness for Season 4 champ Carrie Underwood make Gabby the new favorite to win.

2. Cade Foehner (Age: 21; Shelbyville, TX)
Every season of “American Idol” has that “guy with a guitar” that seems to be destined for the finale. But Cade is so much more than that. His performance of Santana’s “Black Magic Woman” proved he was more than a cliche when he emerged to the front of the stage and drew thunderous applause for his blistering guitar solo. His follow-up performance of “Bright Lights” proved nearly as grandiose and left the judges and live audience all on their feet.

3. Maddie Poppe (Age: 20; Clarksville, IA)
The season’s dark horse is this folk artist who gives a fresh spin on every song she touches. Maddie flew way under the radar throughout the audition process but many feel her take on Simon & Garfunkel’s “Homeward Bound” was a show-stopper. It launched her from the bottom of the heap to the top, but her follow-up performance of “Walk Like an Egyptian” didn’t make the same impression. If she continues to create memorable moments though, don’t be shocked to see this singer-songwriter steal the show.

4. Michael J. Woodard (Age: 20; Philadelphia, PA)
If personality counts for anything, and it does, consider Michael a threat to take the crown. The likable singer has an innate ability to choose songs that make no sense on paper and turn them into memorable moments. His most contemporary song to date was Sia’s “Titanium” which proved to be enough to earn America’s vote into the Top 10. The following night Michael went back to his unpredictable antics, singing “Believe In Yourself” from “The Wiz.” Michael’s unique stage presence, song choices and stage antics continue to make viewers fall in love with him.

5. Caleb Lee Hutchinson (Age: 18; Dallas, GA)
Caleb is the Southern country boy that Americans can’t get enough of. He sang “Midnight Train to Memphis” on his way to being voted into the Top 10 and followed it up with “Getting You Home.” Caleb’s voice is classic country, a genre that always does well on “American Idol.” To add fuel to that fire, Caleb has a fun personality and has lost an incredible 70 pounds on his way to becoming a heartthrob of sorts and represents the underdog.

SEE ‘American Idol’ Top 10: Who is singing on Sunday April 29, what Disney songs will they perform?

6. Catie Turner (Age: 17; Langhorne, PA)
This girl has the personality and flare to go all the way, but her lighthearted sense of humor can make it difficult to take her seriously as an artist. Her performances of “Take Me to Church” and “Havana” served her well in showing off her artistic talents, but Catie’s interview segments still overshadow her singing. America voted her into the Top 10, but if she can’t make music the focus of her time on “American Idol” it will be tough to see her in the winner’s circle.

7. Jurnee (Age: 18; Denver, CO)
Like many people, I was shocked when Jurnee was not voted into the Top 10 by America’s vote. But I still hold out hope for this pop songstress who arguably has the best stage presence this season. She held nothing back with her Top 14 performance of “Bang Bang,” but perhaps the stage antics and rap verse took away from her vocal ability. She once again proved why she had long been considered a front-runner with “Never Enough” from “The Greatest Showman” and the judges saved her. With proper song selection, I am confident Jurnee can regain momentum, but as of now she’s got an uphill battle.

8. Ada Vox (Age: 24; San Antonio, TX)
The harsh reality is that a drag queen is simply going to have a tough time winning “American Idol,” a series that caters to a broad audience, many of whom aren’t comfortable with this art form. Ada has been a vision on stage throughout the process and her performance of “The Show Must Go On” was a showstopper. The following night, with the pressure on, she belted out “And I Am Telling You I Am Not Going” and the judges immediately saved her, advancing Ada to the Top 10. But I wasn’t blown away by that performance. It was rocky. And unfortunately for Ada, the slightest slip will cost her the competition far easier than it would anyone else.

9. Dennis Lorenzo (Age: 26; Philadelphia, PA)
Dennis has the potential to go from the bottom to the top if he chooses the right songs and is able to loosen up on stage. He’s a contemporary R&B artist who infuses rock music into his performances like “In My Blood” by Shawn Mendes. He deserved to be voted through, but he wasn’t. The judges saved him after an even more inspiring performance: “This Woman’s Work” by Maxwell. What Dennis is lacking is confidence and it shows on stage. He has the talent. But will he be able to turn things around quickly enough? I’m not sure.

10. Michelle Sussett (Age: 22; Miami, FL)
To date Michelle’s personal journey of immigrating to the United States from Venezuela has been more interesting and inspiring than any of her performances. She continuously makes terrible song selections, beginning with “Friends” by Marshmello & Anne Marie. During the performance she seemed to cater to the live audience while abandoning the millions of viewers at home responsible for saving her. Facing elimination, she decided on the self-penned “I’m a Dreamer,” which also failed to resonate with viewers and her voice failed to shine. Michelle has seemed to be a judges’ favorite all season, but I’m not sure viewers have ever been in her corner.