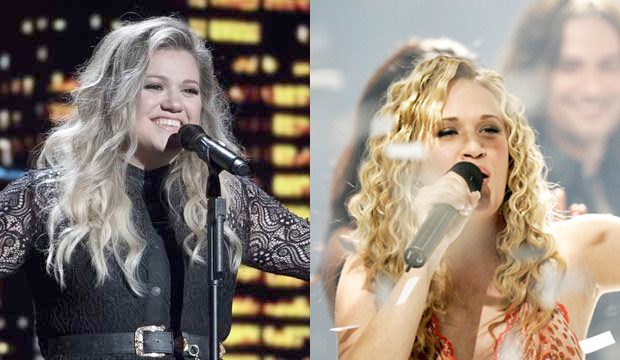 Surprising no one, Kelly Clarkson and Carrie Underwood have topped our recent poll that asked you to name your favorite “American Idol” winner of all time. With 24% of the vote, Clarkson just narrowly beat out Underwood (23%) to earn the top spot. None of the other 13 champs even came close in our poll results. See all 15 winners in our photo gallery above, and then sound off on your fave down in the comments section.

Clarkson was the first-ever “American Idol” winner back in 2002, while Underwood claimed victory a few years later for the reality TV show’s fourth season. As far as the Grammys are concerned, both ladies are winners as Clarkson took home two Grammys in 2005 (“Breakaway” and “Since U Been Gone”) and another in 2012 (“Stronger”), while Underwood has amassed a whopping seven trophies, including Best New Artist of 2006.

Over the past 16 years, Clarkson released eight successful studio albums and can now be seen as a coach on NBC’s rival singing series “The Voice.” Underwood, who’s released six studio albums since her victory in 2005, continues her nationwide country tour with shows in Tennessee on June 8 and Minnesota on August 2.