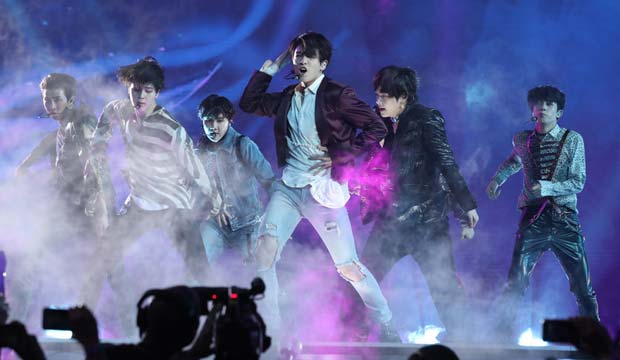 Get ready for a Korean invasion at the American Music Awards. According to our predictions, global K-pop fan favorites BTS are the front-runners to win Favorite Social Artist, which just opened for voting on September 24. All AMA categories are decided by fans voting online, but this race will demand even more dedication from the BTS Army.

In most categories fans can vote once per day per voting method (via online ballot or on Twitter). But in New Artist of the Year, Collaboration of the Year and Favorite Social Artist, fans get to vote 100 times per day per voting method. It’s fitting that the Favorite Social Artist race would be open to so many votes because it means that it’s not just how many fans you have that counts, but which fan bases are passionate enough to vote up to 200 times per day en masse.

BTS may have just those kinds of fans. They won Top Social Artist at the Billboard Music Awards in both 2017 and 2018. And they won Choice Fandom and Choice International Artist at the 2018 Teen Choice Awards. Our users think that will translate to an AMA victory too. Based on the combined forecasts of Gold Derby users as of this writing, BTS get leading odds of 11/10, followed by Ariana Grande (7/1 odds), Shawn Mendes (22/1 odds), Demi Lovato (80/1 odds) and Cardi B (100/1 odds).

The international act has been making inroads in the US in recent years, topping the Billboard 200 albums chart with “Love Yourself: Tear” and “Love Yourself: Answer,” both in 2018. Their single “Fake Love” became their first top-10 song on the Billboard Hot 100 singles chart. And now it looks like they’ll add an AMA to their Billboard and Teen Choice honors on the strength of their widespread popularity. Do you agree with our AMA predictions?