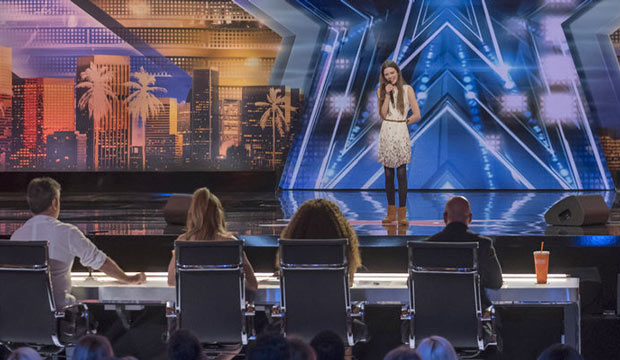 Thirteen-year-old singer Courtney Hadwin, whose “America’s Got Talent” audition last week went insanely viral, is fans’ favorite Golden Buzzer act so far of 2018. This soft-spoken teenager performed Otis Redding‘s “Hard to Handle” and wowed “AGT” judge Howie Mandel so much that he pressed his Golden Buzzer. Based on the results of our recent poll, Hadwin is the Golden Buzzer act fans most want to win Season 13. She earned 59% of the vote, followed by Tyra Banks‘s pick Zurcaroh at 22% and Simon Cowell‘s choice Michael Ketterer at 19%. (Mel B and Heidi Klum‘s Golden Buzzers will be announced in upcoming episodes of NBC’s reality TV show.)

Hadwin has a built-in fan base as she previously reached the Final 6 of “The Voice Kids UK” in 2017, losing to Jess Folley in the Season 1 finale. A member of Team Danny Jones, this Hartlepool, England native performed such iconic songs as “Nutbush City Limits,” “Dancing in the Street,” “I Got You (I Feel Good)” and “And I Am Telling You I’m Not Going” during her time on “The Voice Kids.”

If Hadwin ends up being the $1 million champ for Season 13 of “America’s Got Talent,” that would make two victories for Mandel in the past three years. (See complete “AGT” winners list.) Back in Season 11 his Golden Buzzer winner was preteen ukulele player Grace VanderWaal, whose successful music career includes the release of her album “Just the Beginning” and touring with Imagine Dragons.

Last year’s winner was another young girl, Mel B’s Golden Buzzer pick ventriloquist Darci Lynne Farmer. In our recent interview with Mandel and Klum, he teased about Hadwin, “I have a Golden Buzzer that I think is [on Darci Lynne’s level].” Hearing that, Klum declared, “Yes, I’m very jealous.” Based on the results of our fan poll, Mandel could be right.

Back during Hadwin’s initial “AGT” audition our live-blogger John Benutty wrote, “Courtney erupted into a surprising rock performance that knocked everyone’s socks off. Howie was blown away by her, comparing her to Janis Joplin and saying that Janis was signed on the spot by Clive Davis, but since he isn’t Clive Davis the best thing he could do for her right now is hit his Golden Buzzer! That means Courtney has a huge boost of confidence on her way straight through to the live shows!”