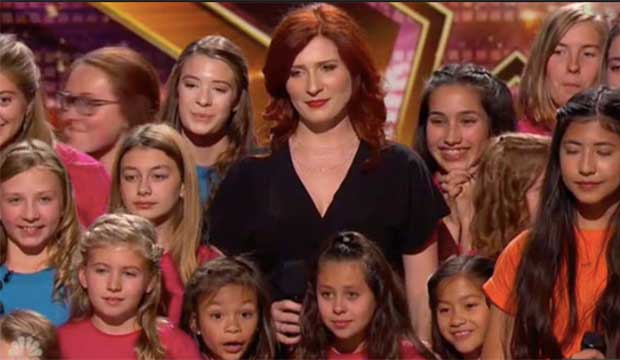 Simon Cowell really, really wanted children’s choir Voices of Hope to advance to the Finals of “America’s Got Talent” 2018. He even made the unprecedented move during Wednesday’s results show to stand next to the talented tykes on stage while they waited for host Tyra Banks to announce the final results. Despite Simon’s heartfelt pleas asking America to “please put these guys, these girls into the Finals,” they ended up being sent home in the Semifinals.

SEE‘America’s Got Talent’ live results 4 recap: Which 5 acts advanced to the finals and who won the Dunkin’ Save? [UPDATING LIVE BLOG]

Voices of Hope began the results show as part of the Dunkin’ Save, meaning they were one of the middle acts based on America’s overnight vote along with stand-up comedian Samuel J. Comroe and acrobats Duo Transcend. As the live social media audience voted to save one of them, the Top 3 acts all advanced immediately: close-up magician Shin Lim, singer Michael Ketterer and acrobatic group Zurcaroh.

After Samuel won the Dunkin’ Save, that meant the fate of Voices of Hope and Duo Transcend would be decided by the “AGT” judges. Simon and Heidi Klum chose Voices of Hope, while Mel B and Howie Mandel opted for Duo Transcend, so the vote was deadlocked. That’s when Tyra was handed the tie-breaking envelope containing the name of the act that received more votes from America: Duo Transcend.

Heidi explained her vote for the choir by saying, “You couldn’t be any sweeter. I said it last night: you are my happy place. You are all so sweet and I love all your voices. I always go with my gut and I’m picking Voices of Hope.” Instead of explaining his decision, Simon simply stated, “I’m just gonna stand with the act I wanna send through.” He then walked from the judges’ table and stood next to Voices of Hope on stage.

Voices of Hope, which had previously earned a Golden Buzzer from guest judge Ken Jeong, inspired America each week with their emotional and pitch-perfect performances. They sang “Defying Gravity” during the Semifinals, “A Million Dreams” in the Quarterfinals, “How Far I’ll Go” in the Judge Cuts and “This Is Me” back in their original audition. Will you miss the singing kids on “Americas Got Talent”? Sound off down in the comments section.