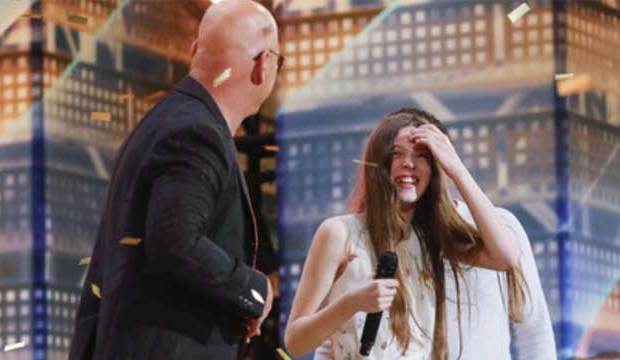 All week long “America’s Got Talent” fans have been making their predictions at Gold Derby for which 7 of 12 acts they think will advance to the next round from the Quarterfinals 1 episode. Now that we’ve seen the first dozen perform in the “AGT” live show (read our recap right here), there’s still time to make or update your predictions. The eligible user with the best score will win a $100 Amazon gift card, so what are you waiting for?

Based on exclusive Gold Derby odds, here are the seven acts that are predicted to advance to the next round:

Amanda Mena (15) – Singer
Mel B‘s Golden Buzzer sang “What About Us” by Pink and gave it a special bilingual flare for English and Spanish audiences.

Angel City Chorale (14-88) – Choir
Olivia Munn‘s Golden Buzzer seemingly brought heaven to earth with their cover of “This Is Me” from “The Greatest Showman.”

Courtney Hadwin (13) – Singer
Howie Mandel‘s Golden Buzzer blew the roof off of the Dolby Theatre with her rendition of James Brown‘s “Papa’s Got A Brand New Bag.”

Shin Lim (26) – Close-up Magician
Shin wowed the judges with his ability to transform a deck of cards into various things including words that spelled “I love Americas Got Talent.”

We Three (21-27) – Sibling Band
Despite being told by Simon that their original song “So They Say” was a step down, they’re still predicted to advance.

That means these five acts are predicted to be eliminated when the results show airs Wednesday, August 15 on NBC:

Junior New System (18-25) – Dance Group
The male dancers from the Philippines once again had the audience on their feet thanks to their fast moves in women’s high heels.

Lord Nil (38) – Escape Artist
This time the danger act included venomous snakes and being chained underwater, but Mel B X’ed him because it was too intense.

Mochi (29) – Diabolo Artist
Mochi’s normal diabolo act received a spark of electricity as he performed in front of a fast-moving high-res video screen.

PAC Dance Team (15-18) – Dance Group
The high school team took on “Willy Wonka and the Chocolate Factory” this week, and Howie Mandel was still not impressed.

Is Jackie Evancho the Kitty on 'The Masked Singer': Watch her sing 'Music of the Night' on 'AGT: The…