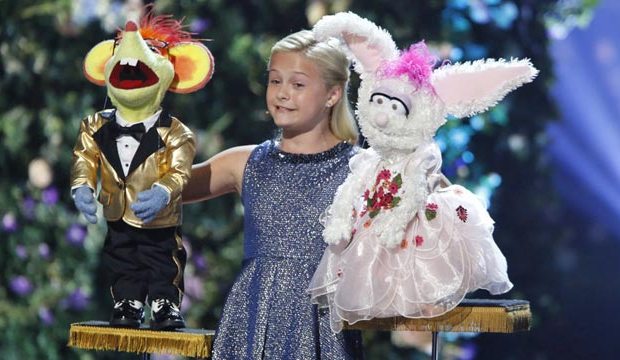 Thirteen-year-old ventriloquist Darci Lynne Farmer is one of the most popular “America’s Got Talent” winners of all time, and now she’s taking her show on the road. The talented tyke, who won “AGT” last September, began a nationwide tour in January. She started off with just five cities but demand for tickets has been so high that the tour will now take her to 26 cities in all through September, including 10 that have just been added. Are Darci Lynne and her puppet friends — Petunia the rabbit, Oscar the mouse, Edna the old lady — coming to YOUR neck of the woods? Scroll down to see the full list of dates, cities and venues.

If you can’t get to one of these live shows, you should be able to catch Farmer and her furry friends on one of this summer’s “America’s Got Talent” results shows. “AGT” has a long tradition of bringing back past winners to perform. Ventriloquist Terry Fator, who is one of Farmer’s inspirations, won season 2 of “AGT” and made a guest appearance on last year’s quarter-finals. The new season of “AGT” starts on Tuesday, May 29 with the pre-taped auditions. The live shows kick off on Tuesday, Aug. 14 with the lucky 13th winner crowned on Wednesday, Sept 19.

Farmer won the 12th season of NBC’s reality TV show last Sept. 20 against such talented acts as child singer Angelica Hale and deaf singer Mandy Harvey. But Farmer had something none of the other acts had: versatility. She was a singer. She was a comedian. She was a ventriloquist. When it was finally time for America to vote, it’s no surprise they awarded Darci Lynne Farmer with the $1 million prize.

SEE NBC premiere dates for ‘America’s Got Talent,’ ‘World of Dance’ and more: Who will be 2018’s Darci Lynne Farmer and Les Twins?

“AGT” judge Mel B had chosen Farmer as her Golden Buzzer act on the very first audition show that aired on May 30, sending her straight through to the live shows at the Dolby Theatre in Hollywood. All of her live performances went insanely viral on YouTube, including her favorite performance of Edna the naughty old lady who had a crush on judge/producer Simon Cowell. What was YOUR favorite performance from Farmer?

Already this year Farmer has visited such cities as Atlanta, GA, Springfield, MO and Kansas City, MO. Below, see the updated list of dates and venues for “2018 Darci Lynne and Friends Live.” You can purchase your tickets right now at www.darcilynne.com.