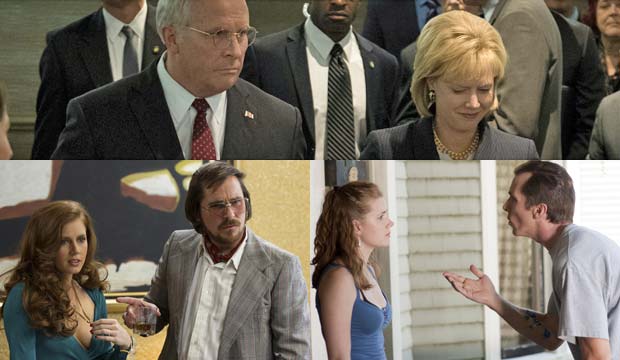 Amy Adams and Christian Bale have co-starred in three films together now: the boxing drama “The Fighter” (2010), the caper film “American Hustle” (2013) and now the political satire “Vice.” As of this writing we think they’ll both be nominated for Oscars for their latest roles, so they might want to keep these collaborations coming because if we’re right, they will have earned nominations for all of their movies together.

For “The Fighter,” Bale won Best Supporting Actor for playing cocaine-addicted former boxer Dicky Eklund, who trains his brother Micky (Mark Wahlberg) for a career in the ring. Adams was nominated for Best Supporting Actress for playing Micky’s girlfriend Charlene, but she lost to her co-star Melissa Leo as Micky and Dicky’s brash mother.

Like “The Fighter,” “American Hustle” was directed by David O. Russell, who reunited Adams and Bale to play con artists Sydney Prosser and Irving Rosenfeld, who tried to pull the wool over the eyes of an FBI agent. They earned nominations for Best Actress and Best Actor, but they lost to Cate Blanchett (“Blue Jasmine”) and Matthew McConaughey (“Dallas Buyers Club”), respectively.

Now they’re back in the race with “Vice” from director Adam McKay (“The Big Short”). The film chronicles the rise of notorious Vice President Dick Cheney (Bale) along with his supportive and equally ambitious wife Lynne (Adams). Based on the combined predictions of thousands of Gold Derby users thus far, Bale ranks second in our Best Actor forecasts with 4/1 odds, behind front-runner Bradley Cooper (“A Star is Born”), who coincidentally co-starred with both of them in “American Hustle.” But seven of the Expert journalists we’ve polled think Bale is the one with the advantage: Thelma Adams (Gold Derby), Edward Douglas (Weekend Warrior), Andrea Mandell (USA Today), Jack Mathews (Gold Derby), Sasha Stone (Awards Daily), Brian Truitt (USA Today) and Susan Wloszczyna (Gold Derby).

Meanwhile, Adams is second in the Best Supporting Actress race with 9/2 odds, trailing Regina King (“If Beale Street Could Talk”). This would be Adams’s sixth nomination, but she hasn’t won yet. Her first collaboration with Bale brought him Oscar gold, so now she’ll have to keep her fingers crossed that their golden touch finally pays off for her. Four Experts are betting on it: Douglas and Truitt who are also predicting Bale, plus Joyce Eng (Gold Derby) and Michael Musto (NewNowNext).

But if it doesn’t work out for Adams this time around, she might want to keep Bale around for every film she makes until it does.