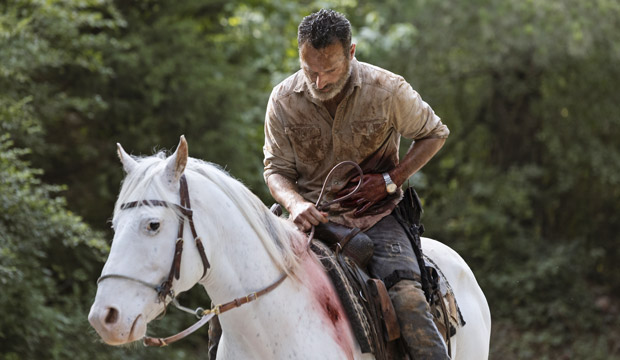 Andrew Lincoln‘s final episode as Rick Grimes on “The Walking Dead” aired Sunday, November 4 on AMC (read our recap here), but as it turns out, viewers haven’t seen the last of their favorite zombie-killing sheriff. Following the conclusion of Season 9, Episode 5, titled “What Comes After,” AMC and Lincoln released a joint statement teasing their upcoming series of original films that will continue Rick’s story. You read that right: Lincoln may have left “The Walking Dead” but he’s still not done playing Rick Grimes. Production on the first TV movie is expected to begin in early 2019.

SEE‘The Walking Dead’ episode 5 recap: Top 5 most jaw-dropping moments from ‘What Comes After’ include Rick’s exit

“It’s not the beginning of the end, it’s the end of the beginning,” Lincoln said about Rick who, after miraculously surviving a stomach wound and a zombie hoard, was essentially kidnapped by Anne (Pollyanna McIntosh) and taken to parts unknown via helicopter. All of Rick’s loved ones believed that he died in the bridge explosion after he set off dynamite in order to stop the walkers from reaching Hilltop Colony, which means nobody will be out there looking for him.

Lincoln continued, “I like the idea that we get to tell a bigger story, maybe with a sort of wider vista. And I’ve always been interested in what’s going on out there, you know, whether or not there is contact with the wider world. I want to know the meta of it all. And I suppose to be able to kind of touch upon that in a contained story for me is a very exciting proposition … Maybe it’s the start of a bigger story.”

For weeks fans have dreaded this episode of “The Walking Dead” Season 9 because they believed that Rick would be killed off. But the show’s creative team threw us all for a loop by keeping the character alive and spinning him off into a series of original films developed by Chief Content Officer Scott M. Gimple, based on the comic book series written by Robert Kirkman. The first telefilm will reportedly “explore the story of where Rick is taken and what he faces in a new corner of the zombie apocalypse.”

“We have a lot on the horizon – starting with a new epic featuring one of the greatest leading actors in television history and one of the best people I’ve ever met. These films are going to be big evolutions of what we’ve been doing on the show, with the scope and scale of features. We’re starting with the first part of the continuing story of Rick Grimes, and there is much more on the way, featuring yet-unseen worlds of The Walking Dead and faces from the show’s past, as well as new characters we hope to become favorites, told by TWD veterans and emerging voices. We want to break new ground with different, distinct stories, all part of the same world that’s captured our imagination for nearly a decade of the Dead.”