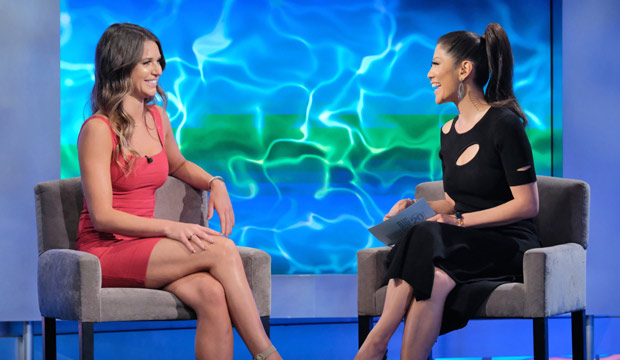 Angela Rummans became Juror #8 following Thursday night’s live eviction episode of “Big Brother” on CBS. The 26-year old fitness model was sent packing by her best friend in the house, Kaycee Clark, who was the only player eligible to vote. Angela was up on the block next her showmance partner, Tyler Crispin, who Kaycee secured a final two deal with on Day 2.

Host Julie Chen (who’s reportedly NOT leaving the show) was quick to question why Kaycee would choose Tyler over Angela. “I don’t know,” Angela responded. “I think when it comes to jury votes me and Tyler were pretty equal and I think when it comes to competitions we were equal as well. I thought it was a 50/50 chance who she was going to pick. I didn’t know. I guess it just came down to what was best for her personal game and I 100 percent respect that and have total support.”

Chen then pressured Angela to talk about her relationship with Tyler and what their plans are moving forward. “I don’t know what the future holds but I am so excited to start our next chapter,” she gushed. “I absolutely adore him. I’m head over heels obsessed with him and I can’t wait to see him once we get out of here!”

Angela then gained some perspective to take back to the jury house with her. During her goodbye message, Kaycee revealed that her and Tyler made a final two deal on Day 2. JC Mounduix said he will always be her friend and hopes to hang out with her after this. Tyler corroborated that he and Kaycee had a final two deal. He also confessed he had the second Power App. Most importantly, Tyler told her he never expected to fall totally in love with her. In tears, Angela held firm that she didn’t blame Kaycee or Tyler for their final two deal and maintained they’re her two best friends. “I will love them till the day I die.”