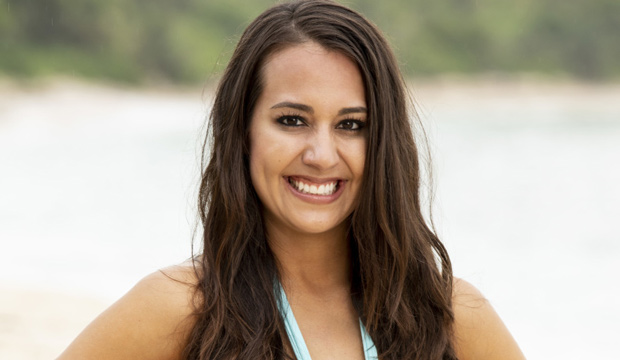 “I apologize to my tribe. I wasn’t trying to be sneaky!” Angelina Keeley declared during Wednesday’s contentious “Survivor: David vs. Goliath” tribal council. (Read our episode recap here.) After Elizabeth Olson spilled the beans that Angelina had told her she was going home, Angelina’s Goliath tribe mates saw that as a sign of her trying to secure a jury vote. Angelina vehemently denied the accusation, but as host Jeff Probst surmised, “Whether you meant it or not is a little irrelevant. People have a perception.” Will Angelina’s mistake come back to haunt her? Vote in our poll below.

Angelina turned to her fellow Goliaths and pleaded, “Guys, they’re just trying to fracture us. They’re using me to try to get the numbers back.” Heading into this week’s merge the Goliaths had a seven-to-six numbers advantage over the Davids, which helped explain why Elizabeth and her buddy Gabby Pascuzzi were so intent on playing up Angelina’s attempt at jury management. Unfortunately, it didn’t work as Elizabeth was voted out.

As the Goliaths and Davids were seen whispering to each other at tribal council, Angelina sighed, “I should have just lied, Jeff, because now all of this is happening. What people know about me out here is I am an authentic person and this game is really hard for someone who’s trying to be a loving person because you’ve gotta cut people.” She continued, “Again, it was not jury management. It was just a raw human moment where I just couldn’t lie.”

SEEMike White made a huge mistake on ‘Survivor’ by keeping Angelina over Lyrsa, say 56% of readers [POLL RESULTS]

Earlier in the day the Goliaths had all agreed to send home Elizabeth, but then Angelina raised eyebrows when she tried to convince them to vote out Christian Hubicki instead. Angelina used military terms in her pitch in an effort to get them excited about ousting Christian, then later proclaimed, “Tonight I’m really depending on six other Goliaths to execute my vision — our vision — and take out the biggest David in this game.”

However, Christian’s fellow “brochacho” buddies John Hennigan and Dan Rengering were not onboard with that plan, so they decided along with Alec Merlino and Alison Raybould to turn the target back onto Elizabeth. It’s unclear why all of the David tribe members also voted to eliminate Elizabeth, but perhaps they knew going in that it was a done deal so they didn’t want to ruffle any feathers by casting their votes elsewhere.