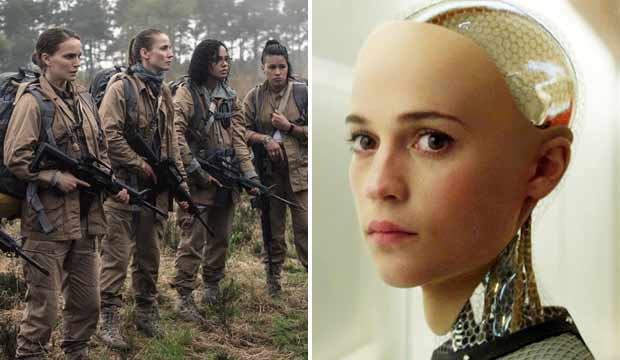 Could “Annihilation” be an early contender for the 2019 Oscars? The mind-bending sci-fi film, about a team of scientists who investigate a strange energy field known as “the Shimmer,” was acclaimed when it opened on February 23, but will it be remembered by awards voters in a few months? “Get Out” proved it’s possible: it was a February 2017 release that earned a Best Picture nomination and won Best Original Screenplay more than a year after it opened. Or for another example you could just look at “Annihilation” director Alex Garland‘s last Oscar winning film, “Ex Machina.”

“Ex Machina” was Garland’s directorial debut. It was released in April 2015 and starred Oscar Isaac as a scientist who created a sentient android (Alicia Vikander). Its unsettling tone, sci-fi subject matter and spring release date didn’t indicate a likely Oscar contender. But critics championed it (78 on MetaCritic, 92% freshness on Rotten Tomatoes), and Vikander was in the midst of a career breakthrough that kept the film in mind for audiences and awards-voters alike. Vikander ultimately won the Best Supporting Actress Oscar for a different film, “The Danish Girl,” but “Ex Machina” was nevertheless nominated for Garland’s original screenplay. And despite its relatively small $15 million budget it pulled off a stunning upset by winning Best Visual Effects against big-budget blockbusters “Star Wars: The Force Awakens,” “The Martian,” “Mad Max: Fury Road” and “The Revenant.”

“Annihilation” has similarly strong reviews (79 on MetaCritic, 86% freshness on Rotten Tomatoes), so while it has been overshadowed at the box office by “Black Panther” — as has every other piece of entertainment in the last month — it could nevertheless take hold in voters’ imaginations. What’s more, a few extra months before Oscar season might actually help it; like “Ex Machina” and “Get Out,” it’s a trippy, unorthodox film that benefits from having time to digest it before voters cycle through their hundred fall screeners of historical biopics.

The film could also benefit from its A-list cast. It stars Oscar winner Natalie Portman and Oscar nominee Jennifer Jason Leigh, and the rest of its principal cast is also female (Tuva Novotny, Gina Rodriguez and Tessa Thompson). After Frances McDormand memorably used her Oscar acceptance speech to advocate for more inclusive hiring, an acclaimed film with matter-of-factly female leads may especially stand out. And in that way it bears some resemblance to “Arrival” (2016), which also focused on a female scientist (Amy Adams) trying to study an otherworldly phenomenon.

If nothing else “Annihilation” could be remembered for its crafts. The film is distinguished by the unique visuals of the world inside the Shimmer, which could garner attention for the cinematography by Rob Hardy (a British Society of Cinematographers nominee for “Ex Machina”), the production design by Mark Digby (a BAFTA nominee for “Slumdog Millionaire”) and the visual effects whose supervisors include Sara Bennett and Andrew Whitehurst (both Oscar champs for “Ex Machina”). Also, the nonlinear story structure highlights the editing by Barney Pilling (an Oscar nominee for “The Grand Budapest Hotel”).

What do you think? Will “Annihilation” hold up until the 2019 Oscars? Vote in our poll below to let us know.