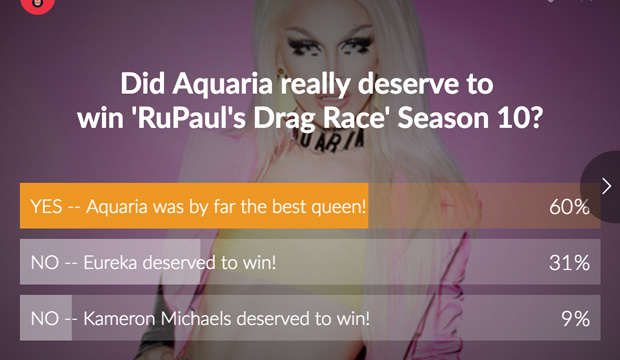 After a hard-fought battle between Aquaria, Eureka and Kameron Michaels in the “RuPaul’s Drag Race” finale, host RuPaul Charles decided to give the Season 10 crown and scepter to Aquaria. And based on the results of our recent poll, that was the correct decision.

A whopping 60% of diehard “Drag Race” fans said that Aquaria deserved to walk away with the victory, compared to 31% who voted for Eureka and 9% for Kameron. Do YOU agree that Aquaria was the true lip sync champion? Sing off down in the comments section.

Prior to the airing of the Season 10 finale Aquaria had leading 2/5 odds to win, based on the predictions of our readers. Eureka came in second place with 4/1 odds, with Kameron trailing at 33/1 odds. Perhaps our odds-makers were influenced by social media? Aquaria had the most Twitter followers by far, which no doubt helped sway RuPaul’s decision as she’d previously asked fans to vote for their favorite on social media.

As for challenge victories, Aquaria was the only queen in Season 10 to win three times. She out-raced her fellow competitors during the climate change challenge, the “Snatch Game” challenge and the evil twin challenge. Comparatively, Eureka won twice and Kameron only won once. Aquaria’s prize was $100,000 as well as a one-year supply of Anastasia Beverly Hills cosmetics.

After being named the newest addition to the “RuPaul’s Drag Race” Hall of Fame, Aquaria told the live VH1 audience, “Sometimes in life you’re not always given a second chance but if you do, take advantage of it and go out with a bang.”

Aquaria later added, “Finally making it to the top of the most influential drag platform of today is proof that no dream is ever unachievable if you have the passion, resilience, love and work ethic to devote your life to that dream.”

2021 Creative Arts Emmy predictions: Our odds say RuPaul, Bo Burhnam and 'SNL' will be among the big…