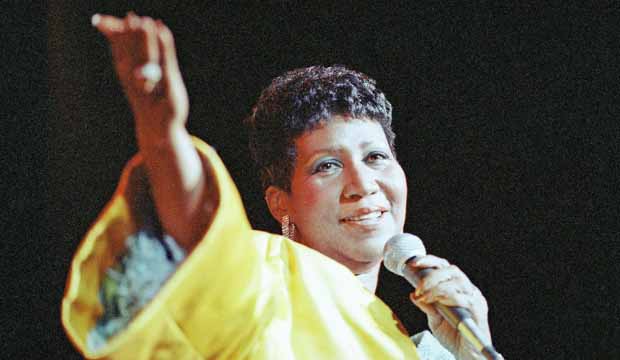 What Billie Holiday is to the blues and Ella Fitzgerald is to jazz, Aretha Franklin reigns over soul as its beloved, uncontested Queen.

While her contemporaries Darlene Love, Mary Wells, Dionne Warwick, Diana Ross, Martha Reeves and Gladys Knight may have had a more sultry style, and while Tina Turner added rock ‘n’ roll rhythms to her R&B wall of sound, Franklin’s created her own robust soul stew. It has body, heart, muscle, it takes on a life of its own when it hits your ears and makes it impossible not to move and groove.

Nearly every kid who grew up in the 1960s probably recalls the first time they heard the Queen of Soul’s voice. For me, it was “Respect.” The sonic explosion of her gospel-trained pipes that blasted out of my tiny transistor radio in 1967 would become her signature anthem. In 1965, Otis Redding’s original version was a request for appreciation after bringing home the bacon every day. But Franklin reworked his lyrics into a war cry for women’s rights, insisting that her man showed respect when he comes home. Franklin and her sisters, Erma and Carolyn, who sang back-up, helped her come up with the idea of spelling out “R-E-S-P-E-C-T” midway (I thought that part was the coolest back in the day). They also repeated the popular catchphrase, “Sock it to me,” which I knew from the TV show “Laugh-In.” At some point, I figured out “TCB” stood for “Taking Care of Business.” I mean, this lady meant BUSINESS! The song ends with a warning that if she doesn’t get respect, she just might up and leave. Take that fool.

Her version of “Respect” treated her well, zooming to No. 1 on both the R&B and pop charts, while also serving as a call to arms in the fight for civil rights. It would garner her the first of 44 Grammy nominations and 18 wins in 1968 while competing in the newly created category of Best Female R&B Vocal Performance. She would go on to claim that honor five more years in a row as well as three other times.

One man who was impressed? Redding. At the Monterey Pop Festival during the summer that Franklin’s version was unavoidable, he jokingly described “Respect” as the song “that girl took away from me, a friend of mine, this girl just took this song.”

As I got older, I also appreciated another of her odes to feminine fortitude, “Think.” This one was a clear warning signal to a man doing her wrong, with its siren call of “Freeeedooooom!” But my favorite version is in the 1980 comedy “The Blues Brothers.” When Jake and Elwood (John Belushi and Dan Aykroyd visit her character’s soul food café so they can stage a reunion of their former band. When Franklin spies these two in her diner, she tells her husband, “We’ve got two honkies out there dressed like Hassidic diamond merchants.” When she hears they are about to recruit her cook and dishwasher, she gives them a musical piece of her mind with a rousing sped-up version of “Think,” complete with backup singers. That she is wearing pink bedroom slippers that match her waitress outfit always tickles me. They leave anyway, but let her have the last word – an appropriate four-letter expletive.

Another Aretha song that got under my skin is 1985’s “Freeway of Love,” just before Franklin became the first female performer to be inducted into the Rock and Roll Hall of Fame. It was the music video that really got me hooked, one that played nearly non-stop on MTV and recruited a younger audience for her music. It was a very model of a summer top-down driving song with its reference to a pink Cadillac and images of a Detroit car assembly line. The catchy tune would earn her a 12th Grammy and an MTV award. That same year, how I wish that she and Annie Lennox of The Eurythmics would have done a whole album of duets and not just the glorious “Sisters Are Doin’ It for Themselves,” which was nominated for a Best R&B Performance by a Duo or Group With Vocals Grammy.

Franklin certainly has had her share of health problems over the years along with her career highs and lows. But just give her the right hat — preferably a gray one with a large bow studded with custom Swarvoski crystals — and a patriotic song to belt such as “My Country, ‘Tis of Thee,” and she will steal the show – as President Barack Obama learned during his first inauguration in 2009.

And when the singer participated in the 2015 Kennedy Center Honors ceremony as part of a salute to songwriter Carole King by performing her “(You Make Me Feel Like) a Natural Woman” while accompanying herself on the piano, Franklin earned a standing ovation midway through just by dropping her full-length fur coat to the stage. That was after the camera caught President Obama wiping his eyes in the audience. His explanation for his teary response? “American history wells up when Aretha sings.” Amen to that.