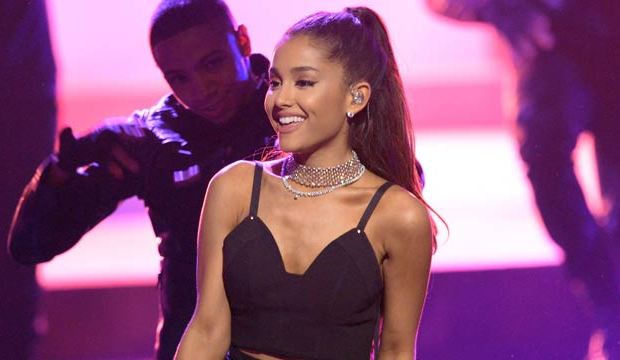 Fox’s singing competition “The Four” is in dire need of a shake-up following the ouster of judge Charlie Walk over allegations of inappropriate behavior. Well, 38% of fans who voted in our recent poll believe that Ariana Grande is exactly the kind of “dangerous woman” that this reality TV show should “focus” on. Do YOU agree that Grande should join “The Four” judges? Give us your thoughts down below.

This multiple Grammy nominee got her start on TV before becoming a worldwide music sensation, so the thought of her returning to her television roots isn’t too much out of the question. Assuming that the other three judges — Sean Combs, DJ Khaled and Meghan Trainor — all come back, Grande would fit in nicely with this group of music superstars.

While Grande earned the most votes in our poll, other A-list stars also nabbed the support of fans. Nicki Minaj came in second place with 23%, followed by Adam Lambert at 16%, Lady Gaga at 12%, Carrie Underwood at 6% and Chris Blue at 2%. The three comedians in our poll all nabbed exactly 1% of the vote: Sarah Silverman, Ricky Gervais and Kathy Griffin.

Here are what other fans of “The Four: Battle for Stardom” had to say about who should take over for Walk on Season 2:

seanmaze: “It should be someone associated with a record label behind the scenes. Shouldn’t be a panel of all recording artists.”

Gorgonzola Matrix: “Didn’t they try to get Scooter Braun to be a judge? It’s not like it even matters, the judges on this show were useless.”

Twerp: “Meghan [Trainor] you can do better than this show.”