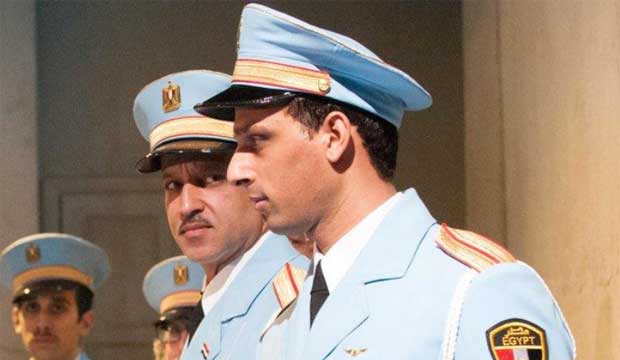 Ari’el Stachel had to audition seven times before landing the role of the womanizing Haled in “The Band’s Visit.” That could turn out to be a lucky number for him on Tony Awards nominations morning as he is tipped to reap a bid for his scene-stealing turn in this acclaimed musical. This Broadway newcomer has already contended at both the Drama Desk and Lucille Lortel Awards for the off-Broadway production of this tuner.

Stachel’s character is the catalyst for the story as his misguided travel plans get his fellow Egyptian musicians stranded in a small Israeli town overnight. Haled ventures out looking for love, or at least a little companionship, trotting out his trite pick-up line, “Do you know Chet Baker?,” at often inopportune times. As Sara Holden (Vulture) observed, “the sensitive, self-aware Ari’el Stachel’s deliciously humorous attempts at flirtation contain their own bitter pill: He’s got an arranged marriage waiting for him back in Egypt.”

Stymied in his efforts, the trumpeter croons “Haled’s Song About Love.” For Marilyn Stasio of Variety, this song is “sung with romantic intensity by Stachel, the tall, handsome ladies’ man in the band who takes pity on a bashful young man (Etai Benson) and shows him how to woo a girl.” David Rooney (Hollywood Reporter), described this show-stopping moment as “a cool, jazzy pep talk, naturally delivered in a feathery Chet Baker whisper.”

Rooney made special mention of Stachel in his rave review, calling him “an absolute charmer, uncovering unexpected depths in smooth-talking Haled.” So too did New York Times critic Ben Brantley, who referenced “a pickup line that’s dangled like an unbaited hook by the band’s aspiring Lothario, whose smooth jazz vocals dazzle in the style of his character’s idol, Chet Baker.”

Peter Marks (Washington Post) echoed this praise for his performance. “Magnetically and amusingly on hand is Ari’el Stachel as Haled, a rakish horn player with an eye for the ladies and an endearingly lame pickup line.” In the end, Haled ends up in the arms of Dina (Katrina Lenk), the cafe owner who has taken pity on the stranded musicians.