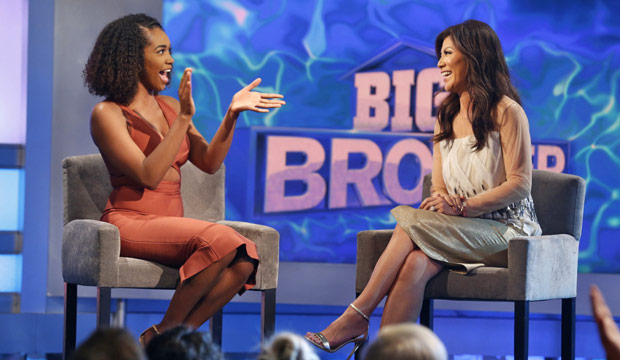 A calm, cool and collected Bayleigh Dayton walked out of the “Big Brother” house following her live eviction Thursday night, despite the week of tears, fighting and high drama that preceded. “I do love [the houseguests] but they get on my last nerve,” she told host Julie Chen in her exit interview. “Being in that house with those people drove me insane!” Bayleigh was evicted over Rockstar Lantry in a 6-1 vote. Gold Derby readers correctly predicted Bayleigh would be sent packing this week.

Chen mentioned Bayleigh’s change in demeanor from earlier this week when the Atlanta flight attendant went nuclear on Tyler Crispin at a house meeting. Why would Bayleigh do that while she was on the block? “I don’t care Julie,” she answered bluntly. “I’m not scared of none of those people in that house. I’m a true Gemini.” Bayleigh then confessed her biggest mistake in the game was telling Rachel Swindler about her power app. It was the downfall of her game, but Bayleigh had one reason for doing it: “She was just crying every two seconds and I didn’t know what to do. I just wanted to shut her up.” Following groans from the audience, Bayleigh looked into the crowd exclaiming, “It’s true!”

One thing Bayleigh doesn’t regret about her time in the “Big Brother” house is meeting Chris “Swaggy C” Williams. “I’m in love with him,” she admitted. “He better be in love with me or I’ll kick his butt.” Chen then revealed to Bayleigh that Swaggy had already gone to meet her family. She jumped for joy before Chen teased her, “They hated him!” Bayleigh didn’t believe it for a second and Chen then conceded that Bayleigh’s family loved Swaggy.

During his goodbye message, Tyler called Bayleigh a “big player.” That show of respect seemed to be all it took for Bayleigh to let her animosity towards him go. She was less enthused to see messages from Angela Rummans and Brett Robinson. What were her final thoughts? “Brett, you had no idea what was going on this week. Everybody still loves me you idiot. Shut up!” Bayleigh will now enter the jury house as Juror #1 and will help crown the winner of “Big Brother” Season 20 in September.