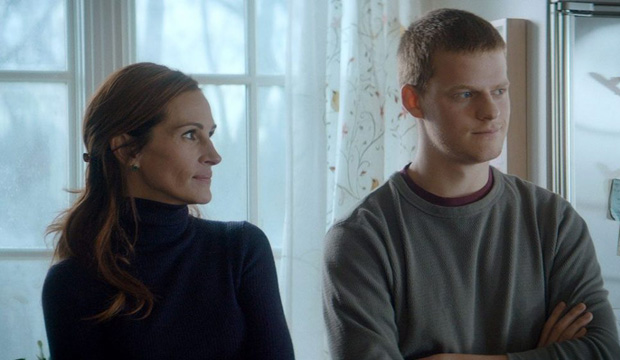 Since becoming a mother in 2004, Julia Roberts has only starred in a handful of movies. This 2000 Best Actress Oscar winner (“Erin Brockovich”) has often opted for less time-consuming supporting roles or voice work. That she agreed to headline Peter Hedges‘ intense family drama “Ben is Back” tells you that the project is something special. Here are five reasons why her tour-de-force performance as a mother determined to keep her drug-addicted son from relapsing will bring her back to the Academy Awards.

1. She is getting some of the best reviews of her career
Hedges is a well-regarded filmmaker. He reaped an Oscar bid for his adaptation of Nick Hornsby‘s novel “About a Boy” and two Indie Spirit bids for his directorial debut “Pieces of April.” His new film scores an impressive 84 on Rotten Tomatoes, with that review aggregator calling it, “refreshingly understated as it subverts family drama stereotypes and provides a forum for terrific performances from Lucas Hedges and Julia Roberts.”

Among the critics singling out Roberts for praise is John DeFore (THR) who says, “she is, in her way, as fierce an embodiment of maternal single-mindedness as Hedges’ last big-screen mother, played by Frances McDormand in ‘Three Billboards Outside Ebbing, Missouri.'” For Wendy Ide (Screen Daily), “Julia Roberts blasts through this family reunion drama-turned-thriller with one of the most forceful performances of her career.” And Steve Pond (The Wrap) observes, “the change in tone also gives Roberts the chance to be as wounded and desperate as we’ve ever seen her, but also as fearsome as we’ve seen since ‘Erin Brockovich.'”

2. She plays a mother lioness, which is always popular with Oscar voters
Roberts fully inhabits the character of Holly Burns, a woman struggling to keep her family together after her son Ben (Lucas Hedges) returns from rehab. She invokes the spirit of Erin Brockovich when she stands up to both the doctor who first prescribed her teenage son a powerful painkiller and the drug dealer who now keeps him supplied in it. Then when Ben goes missing on Christmas Eve, Holly heads out alone to hunt him down.

Hedges shoots these tense scenes from unflattering angles, using stark lighting to capture the anguish of Holly as she searches in vain. Over the years, the academy has often rewarded women who play mothers on a mission. Three such roles won their portrayers the Best Actress Oscar in the past decade alone: McDormand last year, Brie Larson (“Room”) and Sandra Bullock (“The Blind Side”).

3. She has already won an Oscar
As her pal Sally Field, who played her mom in “Steel Magnolias,” pointed out when she won her second Oscar for “Places in the Heart,” “you like me, you really like me.” Field is just one of 14 two-time Best Actress winners. While she was like most of these double dippers who won their second Best Actress Oscar within just a few years of their first, there is plenty of precedent for gaps of a decade or two.

McDormand won her bookend Oscar 21 years after she took home her first for “Fargo.” Meryl Streep endured a slew of losses after winning for “Sophie’s Choice” in 1982 before picking up her second Best Actress trophy in 2011 for “The Iron Lady.” And Katharine Hepburn bided her time for 34 years before collecting the second (of an eventual four) Oscars for “Guess Who’s Coming to Dinner.”

4. She is also starring in an acclaimed TV series
Roberts is receiving some of the best notices of her career for her first regular role on TV in the Amazon drama series “Homecoming.” She is likely to reap bids from both the Golden Globes and SAG Awards in the weeks leading up to Oscar voting. Many of the newer academy members hail from the small screen, so they won’t be snooty about her decision to do a TV series.

“Homecoming” scored a jaw-dropping 97% freshness on Rotten Tomatoes. That site singled out reviewers who called it “an impressive small-screen debut for Julia Roberts,” which “balances its haunting mystery with a frenetic sensibility that grips and doesn’t let go.”

She plays Heidi Bergman, a caseworker who helps soldiers transition into civilian life. Working as a waitress four years later, she finds out her memory of that experience has been all but erased. This plot twist gives Roberts a chance to play two very different versions of the same woman.

5. She is still America’s Sweetheart
Roberts remains immensely popular among her peers. Five years ago, the actors branch of the academy nominated for her scene-stealing supporting turn in “August: Osage County,” where she was more than a match for Meryl.

She has shown an enduring and heartwarming loyalty to the late Garry Marshall, who launched her into the stratosphere with “Pretty Woman.” She appeared in two of his ensemble comedies — “Valentine’s Day” and “Mother’s Day” — neither of which was particularly well-received. And she recently jetted east to attend a special performance of the Broadway version of “Pretty Woman” dedicated to his memory.