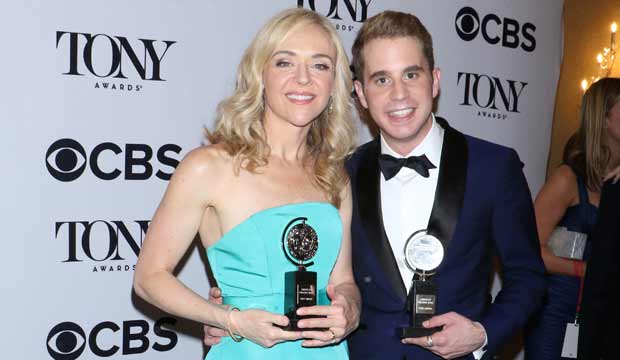 Ben Platt and Rachel Bay Jones won the 2018 Daytime Emmy Award for Best Musical Performance in a Daytime Program. They and their co-stars from the hit Broadway musical “Dear Evan Hansen” prevailed for their performance of the number “You Will Be Found” on “The Today Show.” That means they have each won a Tony, Grammy and Emmy for the same Broadway show, just like Cynthia Erivo did in 2016-2017 for “The Color Purple.” So have the movie rights for “Dear Evan Hansen” been sold yet? Platt and Jones are now only an Oscar away from achieving the EGOT grand slam of show business awards. Check out the complete list of Creative Arts Emmy winners here.

Platt was awarded Best Actor in a Musical and Jones received Best Featured Actress in a Musical at the 2017 Tony Awards for “Dear Evan Hansen.” The show tells the story of the socially anxious title character (played by Platt), who lies about his relationship with a classmate who has died. The musical score was written by Benj Pasek and Justin Paul, who are also three-quarters of the way to EGOT, needing just an Emmy to finish their historic achievement.

After the show cleaned up at the Tonys, Platt and Jones won a 2018 Grammy with their fellow performers for the cast recording. And now they’ve got their Emmy. Interestingly, one of their “Evan Hansen” co-stars already had a couple of Daytime Emmys before receiving this one: Michael Park won Best Actor twice (2010-2011) for starring on “As the World Turns,” but while Park also received a Grammy for the cast recording, he wasn’t nominated for a Tony so he’s not as close to that EGOT as Platt and Jones now are.

Being a hair’s breadth from EGOT is especially remarkable for Platt as he’s only 24-years-old and conceivably has decades to pursue that Academy Award. If not a “Dear Evan Hansen” film adaptation, perhaps someone could green-light an original musical starring Platt, Jones, and Erivo, produced by Trey Parker and Matt Stone, and featuring original songs by Cyndi Lauper and Lin-Manuel Miranda so they can all finish their EGOT at the same time. Make it happen, Hollywood!