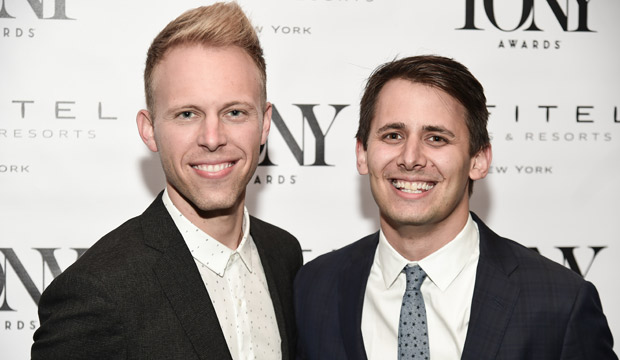 Will a Pasek and Paul tune be music to Oscar voters’ ears again? After winning Best Original Song last year for “City of Stars” from “La La Land,” Benj Pasek and Justin Paul are gunning to be the third reigning champs to defend their crown with their Golden Globe-winning hit “This Is Me” from “The Greatest Showman.”

The first songwriting team to go back-to-back was composer Henry Mancini and lyricist Johnny Mercer, who won for “Moon River” from “Breakfast at Tiffany’s” (1961) and the title track from “Days of Wine and Roses” (1962). Three decades later, Alan Menken achieved the feat as well, winning for the title song from “Beauty and the Beast” (1991), shared with late lyricist Howard Ashman, and “A Whole New World” from “Aladdin” (1992), with lyricist Tim Rice.

SEE Good news for ‘This Is Me’: The Globes and Oscars have sung the same tune more often than you might think

Pasek and Paul shared their Oscar last year with composer Justin Hurwitz, along with an additional nomination for “Audition (The Fools Who Dream)” from “La La Land,” but the duo composed and wrote the showstopping “This Is Me” themselves. Since their Oscar win, they’ve picked up a Tony and a Grammy for “Dear Evan Hansen,” and just need an Emmy to complete their EGOT.

“This Is Me” is sitting in second place in our latest predictions, but it’s giving chase to frontrunner “Remember Me” from “Coco.” “The Mystery of Love” from “Call Me by Your Name,” “Mighty River” from “Mudbound” and “Stand Up for Something” from Marshall” round out the field.

Will 'The Many Saints of Newark' stage a box office shakedown or swim with the fishes?

2021 Broadway fall season preview of musicals: Will these 6 shows (including 'Six'!) be Tonys contenders…

Will 'CODA' be Marlee Matlin's ticket back to the Oscar race after 35 years?

Coldplay joins the BTS 'Universe': What do you think of their cosmic collab? [LISTEN]

From A Surprise Emmy To Another Surprise Oscar? Olivia Colman Is Rising In Our Odds.

Will ‘The Many Saints Of Newark’ Stage A Box Office Shakedown Or Swim With The Fishes?

When Beck Beat Beyonce: Grammys Flashback To The Notorious Album Of The Year Upset.
Must Read
Show Articles