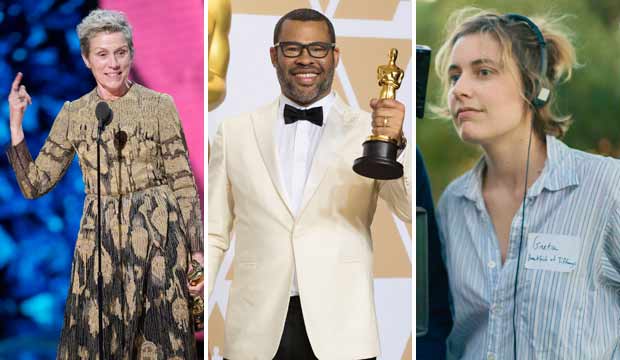 For the awards-obsessed writers and editors of Gold Derby, the Oscars are like every Christmas, birthday and wedding rolled into one. We eagerly await the announcements of the winners in every category, analyze the surprises and snubs, celebrate our own savvy predictions, and bemoan those whose predictions showed us up.

Below are our collective thoughts on the highs, lows and WTF moments of the 2018 Oscars ceremony on Sunday night. And check out the complete list of winners here.

It was overall a really entertaining, heartfelt, poignant, emotional and even a little political show. Well aced, great winners, beautiful use of film clips, great performances, and a great host. Rob Licuria

Three words – Eva. Marie. Saint. This legendary star of the silver screen earned a richly deserved standing ovation and, per usual, was an absolute class act. Saint was so touching in reflecting on her late husband Jeffrey Hayden and absolutely riveting when reminiscing about the late, great costume designer Edith Head. If only we could have a three-hour show of Saint’s incredible Hollywood memories! Andrew Carden

Keala Settle knocked her performance of “This Is Me” out of the park! My goosebumps had goosebumps. Marcus James Dixon

Hands down, without a question, Frances f***ing McDormand! Of all her many amazing acceptance speeches she gave the best at the Oscars! This was an all-time great acceptance speech! Amanda Spears

Eva Marie Saint and Rita Moreno — more lady-legend presenters, please. The audience reaction to Lesley Manville’s perfect clip made up for her loss. And it was a big night for the Olympics: two Olympics-themed films won (“Icarus” and “I, Tonya”) and Chloe Kim gets a shout-out from Queen Frances. Joyce Eng

ROGER F***ING DEAKINS!!! I was skeptical that he would win just because I was personally hoping he would finally claim Oscar gold. It was so great to see one of the finest lensers of our time take home his first Oscar. Now let’s hope the academy follows what they did with Emmanuel Lubezki and gives Deakins two more in a row. Charles Bright

Keala Settle brought the down with “This is Me.” She exceeded every expectation and was the highlight of the telecast. Sam Eckmann

Frances McDormand was the bright light in a sea of mostly underwhelming speeches, and the set! Oscar glamour at its finest. Tony Ruiz

So much good, I don’t know where to begin. Jordan Peele won for writing “Get Out.” Roger Deakins finally won for Best Cinematography. A number of great speeches and a fairly excellent telecast overall with tons of clips of the nominated performances and lots of nods to Oscar history: someone green-light a movie starring Rita Moreno, Jane Fonda, Helen Mirren, Eva Marie Saint, Jodie Foster, and Jennifer Lawrence — stat! Daniel Montgomery

Deakins FINALLY winning Best Cinematography on his 14th try, Daniela Vega‘s emotional reaction to the Foreign Language Film win for “A Fantastic Woman,” and the sheer joy and surprise of the makers of “Icarus” after their surprising Best Documentary win.  And of course, a shoeless Tiffany Haddish who’s welcome back to these Oscars any time. Tom O’Brien

I wish the Oscars would showcase some of the below-the-line categories like they used to. Show us the costumes. Let us hear the scores played by the orchestra. Show us the editing. Rob Licuria

Not that it was unexpected, but zero victories for “Lady Bird,” one of the finest pictures of the year, is simply a travesty. Andrew Carden

All the love for “The Shape of Water” and “Three Billboards” meant that “Lady Bird” flew home empty-handed. Too bad. Marcus James Dixon

Presenters for Best Actor and Actress. While I had no problems with the actual pairings, why they chose to do this is questionable. Amanda Spears

How awkward was it when the music started playing off Robert Lopez but abruptly stopped when he started talking about his late mother? Joyce Eng

Some of the song performances felt off. “Remember Me” felt very strange to watch and I couldn’t believe how shortened they made “The Mystery of Love.” Charles Bright

The show wouldn’t have run so long if it weren’t for the abundance of montages. I love movies too, but one would have sufficed. Sam Eckmann

No awards at all for “Lady Bird” — not surprising, but still disappointing. The season started off so well with rapturous critical acclaim and industry enthusiasm, but after winning two Golden Globes the film kept getting shut out everywhere else: Critics’ Choice, SAG Awards, BAFTAs, now Oscars. At least Greta Gerwig had a moment of glory at the Independent Spirit Awards. Daniel Montgomery

I echo several colleagues’ plea to not have presenters give out awards in which their films are nominated. Sound Editing and Sound Mixing were the two categories where “Baby Driver” had a chance, and to put that film’s stars, Ansel Elgort and Eiza Gonzalez, in the position of having to put on a happy face when their film lost was totally unnecessary. And the “Remember Me” number from “Coco” was just bad, Gael Garcia Bernal off-key and the production number looked like dinner theater on board a Disney cruise ship. Thank goodness the song won, though. Tom O’Brien

Some of the presenter banter was unwatchable. On an otherwise excellent Oscar night, they could have saved some much needed time to let the winners speak. Rob Licuria

“Remember Me” may be a lovely tune but its Oscar staging was an outlandishly garish sight, a gaudy production number that reeked of the comparably unflattering performances of Disney tunes directed by Paula Abdul in the early ’90s. Andrew Carden

Warren Beatty and Faye Dunaway should have been given more time to talk about what happened last year. Oh well. Marcus James Dixon

Its a shame that in a year where all five of the Best Original Song nominees were so good the performances were plagued by audio problems. Amanda Spears

For the love of God, stop having actors present categories in which their films are nominated. Joyce Eng

Kobe Bryant winning an Oscar for the aggressively fine short film “Dear Basketball.” I was hoping that in the wake of all this #MeToo stuff that the idea of actually giving Bryant an Oscar would be too much for the academy. But I guess I should have known better. It must also suck for full-time filmmakers to see Bryant be able to take home an Oscar in this category. Charles Bright

Was something wrong with Wes Studi? Tony Ruiz

If these were the #MeToo Oscars, then giving an Oscar to Kobe Bryant, the subject of well publicized sexual assault allegations, sent decidedly mixed signals. The academy might wake up to some uncomfortable think pieces about where they really stand when it comes to supporting women. Daniel Montgomery

On an evening in which women speaking out against sexual assault was a recurring theme, to give an Academy Award to alleged rapist Kobe Bryant for an meh short was jarring at best. Tom O’Brien