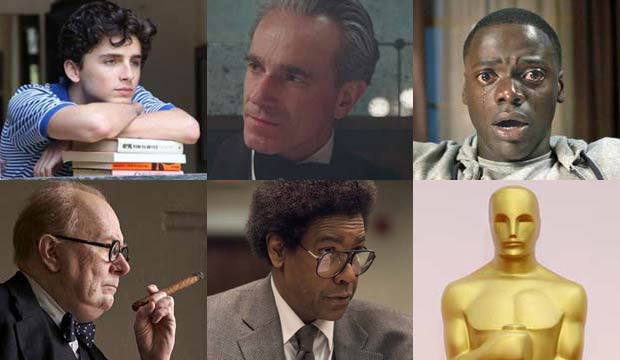 Gary Oldman (“Darkest Hour”) is far out in front to win the Oscar for Best Actor for his transformative performance as Winston Churchill, but upsets are always possible. While Oldman has already taken home the Critics’ Choice, Golden Globe and SAG Awards, there may be some new academy voters who are looking elsewhere in this category. Who do YOU think could take him down at the 2018 Oscars? Vote in our poll below.

Oldman will almost certainly win on his home turf at BAFTA, giving him the nearly unbeatable combination of televised precursor wins. That doesn’t mean his fellow Best Actor nominees should give up hope yet, as we saw in 2001 when Russell Crowe (“A Beautiful Mind”) swept Critics’ Choice, Golden Globes, SAG and BAFTA only to lose to Denzel Washington (“Training Day”) at the Oscars. It will be tough to beat Oldman, especially with “Darkest Hour” earning a surprise Best Picture nomination, but not impossible. Let’s run down his tough competition.

Timothee Chalamet, “Call Me by Your Name” — Chalamet is arguably the biggest breakthrough performer this award season, coming out of nowhere to deliver a stunningly layered performance as Elio Perlman in “Call Me by Your Name.” Chalamet has earned multiple critics prizes, including New York and Los Angeles, and made history as the youngest nominee for Best Actor since 1939, at the age of 22. There is a lot of passion behind this performance, and you could see younger voters appreciating his naturalistic approach as opposed to Oldman’s traditional, theatrical work.

Daniel Day-Lewis, “Phantom Thread” — With what is presumed to be his final role, Day-Lewis has a farewell narrative unlike anyone else in this category. His performance as Reynolds Woodcock in “Phantom Thread” does not have the same universal acclaim as his Daniel Plainview or Abraham Lincoln, but the film features both the showy and subtle sides of his acting greatness. While Day-Lewis already has three Oscars, voters might see this as an opportunity to put a feather in the cap of one of film’s finest actors. If he were to win, he would tie Katharine Hepburn for the most acting wins in Oscar history.

Daniel Kaluuya, “Get Out” — As Chris Washington, a black photographer reacting to his white girlfriend’s horrifying family, Kaluuya’s nomination is a surprising one, given the academy’s bias against both horror films and reactive performances. Yet, there was something special about what Kaluuya brought to the role that made him one of the most compelling lead characters of the year, and like Chalamet he has earned numerous critics wins. If voters go crazy for “Get Out” we may see its star rewarded, too.

Denzel Washington, “Roman J. Israel, Esq.” — While Washington did earn Golden Globe and SAG nominations, his appearance here was a bit of surprise compared to his fellow nominees. “Roman J. Israel, Esq.” did not tear up the box office nor did it earn great critics reviews, but Washington is undoubtedly commanding in the title role, and his popularity cannot be denied. Washington came close to winning his third Oscar last year for “Fences” but he lost to Casey Affleck. In this current Hollywood climate there may be an effort to make it up to Washington after last year’s controversial decision.