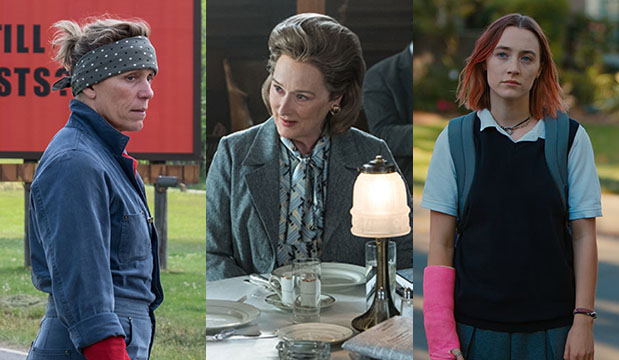 Frances McDormand (“Three Billboards Outside Ebbing, Missouri”), Saoirse Ronan (“Lady Bird”) and Meryl Streep (“The Post”) are all projected to earn Best Actress Oscar nominations, per our latest combined odds. And if any of them wins, she’d rewrite the Oscar history books as one of the oldest (McDormand, Streep) or youngest (Ronan) Best Actress champs ever.

The current top 10 oldest Best Actress winners — their age calculated at the time of the award — are:

After her Golden Globe win and magnetic speech, McDormand saw her Oscar odds rise even more to a leading 11/5. She will be 60 years and 254 days old by the March 4 ceremony. If she wins as expected, she would become the ninth oldest winner, knocking Moore out of the top 10. Moore and Booth are the only actresses to win the prize in their 50s, a sign of not only the lack of juicy roles for actresses of a certain age but Oscar’s well-known preference for young starlets.

Streep, who sits in fourth place with 7/1 odds, will be 68 years and 255 days old by the Oscars, which would make her the third oldest winner. She’d join Hepburn as the only actresses to appear multiple times in the top 10. Hepburn, of course, won the first of her record four Best Actress Oscars at 26 years and 308 days old and bagged her final three trophies after she hit her 60s, a decade that has proven to be most fruitful for older actresses.

Even though Hepburn’s first victory came when she was in the Best Actress Oscar sweet spot age of mid-20s, she is not in the top 10 of youngest winners. They are:

As for the other two predicted nominees, Sally Hawkins (“The Shape of Water”) and Margot Robbie (“I, Tonya”), they’ll fall just outside of both lists should they win. Hawkins, who is third with 4/1 odds, would be the 20th oldest winner at 41 years and 311 days, while Robbie, in fifth with 17/2 odds, would rank as the 19th youngest at 27 years and 245 days old.