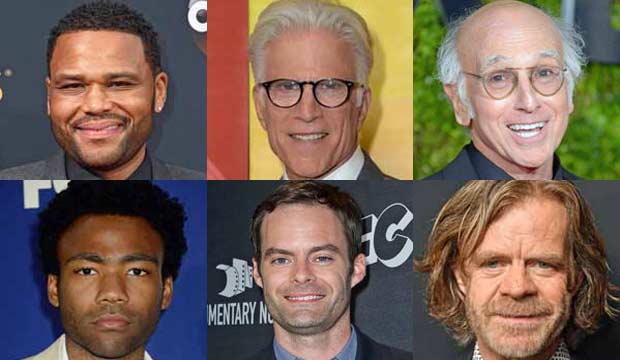 TV academy members have just a few weeks to watch all of the Emmy episode submissions for the 2018 nominees before final voting takes place August 13-27. Which of this year’s Best Comedy Actor contenders has submitted the strongest episode: Anthony Anderson (“Black-ish”), Ted Danson (“The Good Place”), Larry David (“Curb Your Enthusiasm”), Donald Glover (“Atlanta”), Bill Hader (“Barry”) or William H. Macy (“Shameless”)? You be the judge! Below, we list the nominees’ episode descriptions and provide links for where you can watch the submissions online.

Anthony Anderson (“Black-ish”) as Andre Johnson
Episode: “Advance to Go (Collect $200)“
Airdate: October 24, 2017
Description: Dre gathers his family together to play Monopoly because “how you play reveals who you are.” It turns out that he himself becomes a jerk by booting his own wife (Tracee Ellis Ross) off his team. While on a hot streak for a while, a few bad rolls of the dice later leave him with bridges burned.
Watch: ABC

Ted Danson (“The Good Place”) as Michael
Episode: “Dance Dance Resolution“
Airdate: September 20, 2017
Description: Michael gives a pep talk to himself and then tries to restart his “Good Place” scenario trying to trick Eleanor (Kristen Bell) and her friends. It’s then reboot after reboot as the group continues to figure out his devious plan. Growing even more desperate, he even proposes an alliance with them so he isn’t doomed with his boss.
Watch: NBC

SEE2018 Emmy nominations: ‘Game of Thrones’ leads with 22, followed by ‘SNL’ and ‘Westworld’ with 21 apiece

Larry David (“Curb Your Enthusiasm”) as Larry David
Episode: “Fatwa!“
Airdate: December 3, 2017
Description: Larry has his musical “Fatwa!” in previews and starring Lin-Manuel Miranda and F. Murray Abraham. After arguments over the direction of the show, the entire cast and crew plan a fun paintball event. But it ends with all-out war as Larry shoots Lin in the throat with a blue pellet while dueling with him “Hamilton”-style.
Watch: HBO GO

Donald Glover (“Atlanta”) as Earn Marks
Episode: “Teddy Perkins“
Airdate: April 5, 2018
Description: Darius (Lakeith Stanfield) goes to a mansion to pick up a piano and is visited by strange pale man Teddy Perkins (Glover in this role in addition to Earnest Marks). Teddy exhibits unsettling behavior and claims the piano’s owner is his brother Benny, who is in a wheelchair and unable to be seen. Later, Teddy holds Darius at gunpoint, handcuffs him and reveals his plan to kill him. Benny bursts into the room and kills both Teddy and himself.
Watch: FX

Bill Hader (“Barry”) as Barry Berkman/Barry Block
Episode: “Chapter Seven: Loud, Fast and Keep Going“
Airdate: May 6, 2018
Description: Barry and Chris (Chris Marquette) survive a doomed mission from the previous episode. Chris overreacts to killing one of the Bolivians, so Barry is forced to kill him before going to the police. Barry then goes to his acting class showcase of “Macbeth” and deliver his one line with great emotion.
Watch: HBO GO

William H. Macy (“Shameless”) as Frank Gallagher
Episode: “Sleepwalking“
Airdate: January 28, 2018
Description: Frank is planning a robbery of Dylan’s house when he leaves on vacation as “one more big score.” He recommends to Fiona that she should “burn out” her unwanted tenants. Frank is impressed by the work done by son Liam on getting the alarm code for Dylan’s house. But it’s a fake, so he takes as many items as possible before the police start chasing him.
Watch: Showtime Anytime