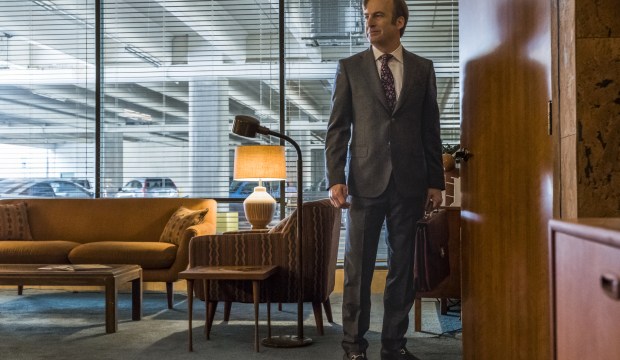 AMC also confirmed what we all suspected but were in hopeful denial about: Chuck (Michael McKean) is really dead. You know the rule: You’re not officially dead on TV until there’s a body and we never saw Chuck’s after his house went up in flames in the Season 3 finale. Plus, producers kept evading the question afterward. Per AMC, Chuck’s death will put Jimmy (Bob Odenkirk) directly on the path to becoming Saul Goodman and his future as a lawyer at risk in the fourth season.

The “Breaking Bad” prequel took an extended break following its Season 3 finale last June, opting to skip this year’s Emmy cycle, the eligibility period for which ends Thursday. Season 4 will be eligible for the 2019 Emmys and the hope is that voters don’t forget about it.

Unlike its mothership series, “Better Call Saul” hasn’t had a lot of luck at the Emmys; it’s garnered 23 nominations through its first three seasons, including Best Drama Series every year, but hasn’t won any category yet. It feels respected but not loved. And with its absence this year and a summer premiere date, it could be “out of sight, out of mind.” (There’s a reason many shows premiere in April towards the end of the eligibility period.)

Of course, a summer premiere date doesn’t mean it’s impossible to be nominated a year later. You just need to be a big force and/or to have a great season. “Breaking Bad”’ returned in July twice and August for its final three outings and won its second and last Best Drama Series Emmy a full year after the last season bowed.

Just last year, “Stranger Things” and “The Night Of” reaped major nominations after premieres in July and August 2016, respectively. And two-time champ “Game of Thrones,” which aired last summer, is banking on not being forgotten.