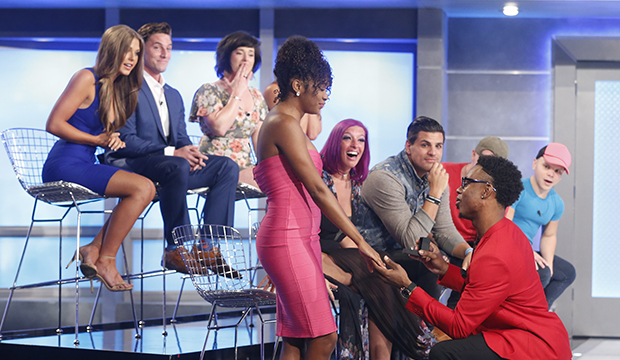 After knowing each other for 23 days and spending more time apart than together, Swaggy C and Bayleigh got engaged on Wednesday’s “Big Brother 20” finale, but it looks like they have more to celebrate. Though they’ve stayed mum (pun intended) on pregnancy rumors, it appears that Bayleigh is in fact with child.

This is not because of Bayleigh’s form-fitting dress that showed a tiny hint of a bump — as any woman would tell you, that doesn’t mean anything — but because of an Instagram Story Swaggy C posted later that night. The couple had written notes to each other during their time apart, which Swaggy showed off in the Story. Eagle-eyed fans noticed one particular Post-It note from Bayleigh.

Bayleigh’s defffinitely pregnant. Swaggy posted this on his story about how they would send letters to each other (when she was in jury) the letter says “sex during pregnancy” congrats to them! #BB20 pic.twitter.com/vakmoTBd1F

“Sex during pregnancy,” she wrote. “You’re going to have to learn to slow down and follow instructions during this part. There are so many changes happening in my body that I love. … I’m open and ready to try ASAP.”

To be clear, they have yet to confirm the pregnancy themselves, and this could all be a masterful joke if they wanted to troll fans who’ve been wondering for weeks if she’s pregnant.

Bayleigh first suspected she was pregnant in August, a month after Swaggy was eliminated second. She told Haleigh that she missed her period, her boobs were bigger, and she was “freaked the heck out” by the prospect of being pregnant. At the time, she had not taken a pregnancy test yet and said, “I don’t even want to know.”

#BB20 #BBLF Bayleigh tells Haleigh about a dream she had. She's missed her period, her boobs are bigger and she thinks she's pregnant. She won't take a pregnancy test until next week. pic.twitter.com/uyJLQ9T3EY

During the backyard interviews on the Facebook post-show with Ross Mathews and Marissa Jaret Winokur on Wednesday, the newly betrothed couple was coy when the “Celebrity Big Brother” alums asked if they wanted to start a family. “Not commenting on anything,” Swaggy said. “We can’t comment on anything baby-related, but we definitely want babies,” Bayleigh added. Way to make everyone more suspicious, guys. They asked if you wanted kids, not if you’re pregnant!

If Bayleigh is pregnant, this is a big week for “Big Brother” babies. On Monday, Season 19 alums and “Amazing Race” champs Cody and Jessica announced they’re expecting their first child in April.