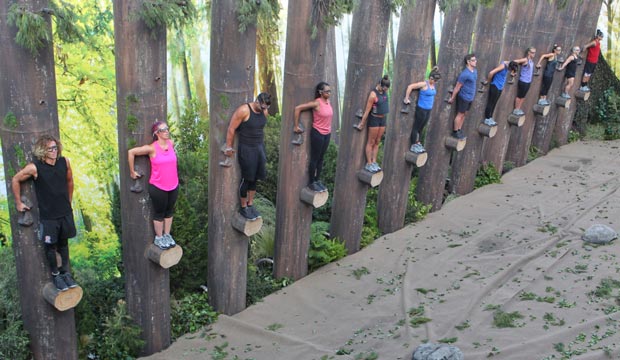 Moments after Winston Hines was evicted on “Big Brother,” the remaining houseguests engaged in an hours-long battle of endurance to see who would replace Scottie Salton as the new Head of Household. Tonight we found out who won this “Out on a Limb” challenge and who that person chose to nominate for eviction. Also in tonight’s episode, as Julie Chen promised, viewers finally got to see the tense conversation about cultural sensitivity that sparked controversy between Bayleigh Dayton and JC Mounduix.

SEE ‘Big Brother 20’: Week 4 Power of Veto ceremony results on #BB20 and what they mean for July 26 eviction

Below, check out our minute-by-minute “Big Brother” recap of Season 20, Episode 12 to find out what happened Sunday, July 22 at 8/7c. Then be sure to sound off in the comments section about your favorite houseguests, who annoys you the most, and who you think will ultimately join the “Big Brother” winners list. Keep refreshing/reloading this live blog for the most recent updates.

SEE ‘Big Brother 20’ spoilers: Who won week 4 Power of Veto competition on #BB20 and what does it mean for July 26 eviction?

8:00 p.m. – “Previously, on ‘Big Brother’!” On Thursday’s live episode, HOH Scottie got his way by breaking up the Bros (Winston and Brett Robinson). Sam Bledsoe could have used her Bonus Life power to save Winston, but ultimately chose not to, which now means whoever gets evicted this week will have the chance to return to the game. We’ve been waiting all weekend to find out who becomes the new HOH, so let’s watch how this competition plays out!

8:10 p.m. – The HOH competition resumes and the houseguests are currently all out on their limbs, suffering through a downpour of rain. In the Diary Room, Brett confesses that he deliberately lied about Rockstar Lantry to put a target on her back. He can’t stand her and doesn’t feel like he can play with her, so he just wants to drive her crazy. In a flashback to the post-eviction, it seems to have worked. Rockstar loses her cool and calls Brett “disgusting.” Meanwhile, Tyler Crispen continues to lie to Kaitlyn Herman, insisting that he voted for Brett to be evicted. Back in the HOH competition, slime and “bird poop” starts dumping all over the houseguests as they hold on to their tree limbs. Nearly 25 minutes in, Rockstar falls and bursts into tears.

SEE‘Big Brother’ Season 20 leaderboard: Did YOU correctly predict Winston Hines would be evicted in Week 3?

8:15 p.m. – Five minutes after Rockstar takes a dive, 240-pound Faysal Shafaat loses his grip and is quickly followed by Brett. These competitions never go well for larger competitors. Next to go are Bayleigh, Angela Rummans, Rachel Swindler, Haleigh Broucher and JC. Kaycee Clark, Kaitlyn, Sam and Tyler are the final four remaining. Eventually Kaitlyn goes down, and as if she was waiting for Kaitlyn to crumble, Kaycee soon follows. Sam pleads with Tyler to jump down and promises not to nominate him. He finally folds and jumps off, making Sam the new HOH! Interestingly enough, whoever gets evicted under her watch will have a chance to battle back into the game.

8:20 p.m. – Minutes after she wins HOH, Sam confesses she already knows who she is nominating. Once her mind is made up, there’s no budging it. Meanwhile, Rockstar is having an absolute meltdown and Bayleigh is trying to calm her down. Bayleigh tells her Sam is the HOH and they can work with her. Rockstar is about ready to quit and Bayleigh is doing a great job of keeping it together while she deals with a total trainwreck.

8:25 p.m. – JC has been working with Tyler for the last couple weeks (everyone has!) and confesses in the Diary Room that him and Tyler were planning to flip the vote and blame Kaitlyn. JC hopes by pointing the finger at Kaitlyn, Faysal will come crawling to him for support. Faysal believes JC and is about to blow up because Kaitlyn is supposed to be his best friend in the house. He thinks either Kaitlyn or Haleigh is lying to him, but in reality neither of them are! I can’t believe it hasn’t gotten around that Tyler is playing everyone at this point. If he is never exposed he’s on his way to a Hall of Fame season.

8:30 p.m. – Kaitlyn asks Faysal to talk and he gives her an attitude. Eventually, he mopes along and follows her. She tells him that he’s hurting her feelings and Faysal says “something isn’t adding up.” The mind games are totally working and Level 6 is celebrating in the other room. Faysal tells Kaitlyn he doesn’t trust her. She starts crying and Faysal looks completely unmoved as he says, “Stop crying and convince me it wasn’t you.” They are interrupted as everyone is called upstairs to see Sam’s HOH room. While everyone is upstairs, Sam tells the house point blank that there will be no one-on-one conversations and she already knows who she is nominating. Furthermore, the HOH room is hers and nobody is allowed in it without her. Dang Sam! Not sure this is a great move for her game, but it ws entertaining to watch. Sam isn’t playing around LOL.

8:40 p.m. – Kaitlyn asked Haleigh and Rockstar if they think Tyler and JC flipped the vote. Instead of believing reality, Kaitlyn comes up with a conspiracy theory that Sam had the power to flip two votes and she used it. To further embarrass herself, she runs to tell Tyler her conclusion. He’s floored by his luck and just goes along with it. Meanwhile, Rockstar ups her already high level of annoyance this week by taking a page from the Josh Martinez playbook. She’s walking around banging pots and pans, screaming how much she loves Brett. She even goes as far as to sit right between his legs and continue the spectacle. Brett is not phased and is thrilled that his plan to send her into a total meltdown has worked.

8:55 p.m. – Bayleigh, Faysal, Scottie and JC are having a conversation. JC tells them that he’s five feet tall, so he’s not considered a dwarf. Bayleigh asks him what the difference between a midget and a dwarf is, and JC tells her that it’s offensive to say that word. He said the word is comparable to the N-Word to describe black people or the F-word to describe gay people. But he said the actual words, which infuriated Bayleigh. JC immediately apologized and said he was just putting it in context, he did not mean to offend anyone and he did not call anyone that word. He was just comparing offensive words. Bayleigh doesn’t want to hear it and storms out of the room. In the Diary Room, Bayleigh talks about the fact that she grew up as the only black girl in a white community and was constantly reminded of her race. Faysal and Haleigh comfort Bayleigh and tell her JC felt remorse. JC interrupts to continue his conversation with Bayleigh alone. She tells him that she was upset because he wouldn’t allow her to speak. Then Bayleigh and JC compare notes and realize they were both bullied as kids. Their argument continues and is just uncomfortable to watch. They then both start getting emotional and there seems to be a real resolution between the two. They hug it out and walk away.

8:59 p.m. – It’s time for the nomination ceremony! It’s weird to see this at the end of an episode that had zero campaigning at all. But Sam has made up her mind and nominated Haleigh and Kaitlyn for eviction. She said her reasoning was that those two take the most from the house and contribute the least. She also told them they don’t treat men in the house well, are the opposite of female empowerment, and should respect themselves more. Sam isn’t a fan of their flirtatious ways. Both Haleigh and Kaitlyn are in tears. Faysal is mad at Sam. And Brett is laughing in glee that he’s not on the block and still has a chance to backdoor Rockstar. What a roller-coaster of an episode! That’s a wrap! Find out on Wednesday night who wins the Power of Veto and if it will be used to remove either Haleigh or Kaitlyn from the block.