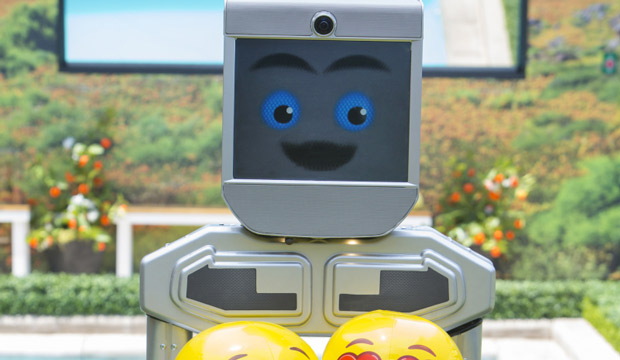 Season 20 of “Big Brother” debuted Wednesday night on CBS, with Chris “Swaggy C” Williams winning the challenge that allowed him to reboot the game. He earned the power to save eight people from eviction, thereby putting the other eight houseguests in danger of being the first person voted out of “BB20.” As the losers of the challenge, Kaycee Clark had to wear a “Pinwheel of Doom” unitard while Sam Bledsoe transformed into a robot. Was Sam able to perform Thursday’s inaugural Head of Household competition as a human, or was she forced to compete as a robot?

SEE‘Big Brother’ 20: Which houseguests do you want to win (and lose) after episode 1 of #BB20?

Below, check out our minute-by-minute “Big Brother” recap of Season 20, Episode 2 to find out what happened Thursday, June 28. Then be sure to sound off in the comments section about your favorite houseguests, who annoys you the most, and who you think will ultimately join the “Big Brother” winners list. Keep refreshing/reloading this live blog for the most recent updates.

9:00 p.m. – “Previously, on ‘Big Brother’!” Swaggy C chose to save himself, Kaycee, Rachel Swindler, Angie “Rockstar” Lantry, Brett Robinson, Scottie Salton, Haleigh Broucher and Faysal Shafaat. That means one of these eight players will be the first person evicted from the Season 20 house: Sam, Tyler Crispen, Bayleigh Dayton, Winston Hines, Steve Arienta, Kaitlyn Herman, JC Mounduix and Angela Rummans. It all comes down to who’ll win HOH, so let’s get this thing started!

9:10 p.m. – The game has officially started! Swaggy C kicked things off in the Diary Room referring to himself in the third person. Please stop! Angela is furious that he did not keep her safe, which is absurd since she told him to his face she wouldn’t keep him safe before the competition started. Now he’s her number one target. But things can change fast. Swaggy overheard Kaitlyn and Angela talking smack about him in the pantry. He walked it off calling them “idiots.” Meanwhile, Kaitlyn has manifested in her mind that she will win HOH. She’s convinced her spirit guides will lead her to victory. As time passed, Kaitlyn cooled down and is no longer upset with Swaggy. Namaste.

9:15 p.m. – Meanwhile, in the kitchen the “bruhs” Brett and Winston are hanging out and grunting. Kaitlyn is leading yoga retreat in another room. Swaggy can’t believe he just aligned himself with the “Big Brother” hippie commune. Then an announcement states that Sam is able to return to the house as a human. But I love her as a robot! It’s hilarious. Over in the bedroom, Haleigh confesses that she has put a lot of trust in Swaggy. Soon Rockstar and Kaitlyn join the conversation and the first power alliance has been born: Swaggy, Haleigh, Rockstar, Kaitlyn and Faysal.

9:18 p.m. – Only the eight players eligible for elimination will be playing in the first HOH competition. In the “BB Circuit Board” the players have to delete their competition and be the last player standing. They run across a balance beam to collect a deletion dot and place it in another player’s tube. When a player receives 10 deletion dots, they are eliminated.

9:30 p.m. – As the game kicks off Steve and Sam are quickly targeted for deletion. Steve is having difficulty defending himself because the former cop has no balance! Bayleigh and Tyler start working together and targeting the same people. Soon after, Winston and Angela begin collaborating as well. Sam was the first player deleted and is upset that she is seen as a target. Steve was eliminated next and is determined to start making deals with fellow houseguests. Next to be eliminated were Kaitlyn, Winston, Angela, JC and Bayleigh. Tyler is the first HOH of the summer!

9:35 p.m. – Tyler is overwhelmed with his newfound power. He simply didn’t want to go home, he didn’t want to be in charge. Swaggy tells Kaitlyn that Angela and Winston were double-teaming her. This immediately makes Angela Kaitlyn’s target. Over in the bathroom, Sam is sulking about being the first one eliminated from the game. Rachel is comforting her and giving her a pep talk.

9:40 p.m. – Winston wants to form an alliance with Angela, Kaycee, Rachel, Brett and Tyler. They would have the numbers and a ton of athletic clout for competitions. If this holds strong this could be a major power play. The only problem is they haven’t secured Tyler yet. And since he’s the HOH, that might be an important.

9:45 p.m. – Winston goes up to visit Tyler in the HOH room. He proposes the alliance of six, which Tyler seems excited about. But with that leaves him with very little options when it comes to nominations. He thinks he will probably have to nominate Sam and Steve. If one of them gets pulled off the block he will have to put up Bayleigh.

9:50 p.m. – Poor Sam has been turned back into a robot before she has a chance to speak to Tyler. Now Robot Sam is crying to Tyler about how she has no teammates and nobody wants to work with her. She feels like a shunned outcast. I feel bad for her, but it’s difficult not to laugh a little at the robot face these words are coming from. Tyler is on the verge of tears and he’s not sure he wants to put Sam on the block. He gives the robot a hug and assures her she’s not his target. I love Robot Sam!

9:55 p.m. – Kaitlyn and Faysal are next to pitch their case to Tyler. Within seconds, Rockstar joins the conversation. She said the worst move would be putting up Sam and Steve because they aren’t threatening. Kaitlyn told Tyler to put up Angela and Winston. Swaggy joins in and agrees Tyler should make a power play. Tyler is convinced Swaggy sent in his minions to do his bidding and he’s not taking the bait. Last to speak with Tyler is Bayleigh. Bayleigh confirmed to Tyler that her and Swaggy are like family. Big mistake! She just confirmed that she’s on the opposite side of the house as him. This season has already turned into the “cool kids” vs. “the outcasts.” That happened fast! But I do like that this cast came to play.

9:59 p.m. – It is time for the nomination ceremony. As HOH, Tyler must nominate two players for eviction. He has decided to nominate Sam and Steve. He cops out of responsibility by saying he just nominated the first two people eliminated from the HOH competition. Well, that’s a wrap for night two! The fun resumes on Sunday, July 1.