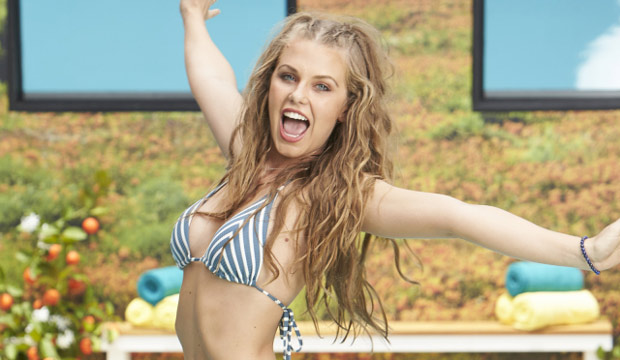 After one of the most shocking “Big Brother” house meetings of all time (one that can only be described as bloody), Bayleigh Dayton was evicted by a 6-1 vote over Rockstar Lantry. Luckily for Bayleigh’s dwindling alliance, Haleigh Broucher was soon crowned as the new Head of Household. That means both Rockstar and Faysal Shafaat should be safe this week … unless the new hacker threw a wrench in Haleigh’s plan. So which two houseguests did Haleigh nominate for eviction? And who won the second Hacker Comp?

Below, check out our minute-by-minute “Big Brother” recap of Season 20, Episode 21 to find out what happened Sunday, August 12 at 8/7c. Then be sure to sound off in the comments section about your favorite houseguests on CBS’ reality TV show, who annoys you the most, and who you think will ultimately join the “Big Brother” winners list. Keep refreshing/reloading this live blog for the most recent updates.

8:20 p.m. – “Previously on ‘Big Brother’!” In Thursday’s 20th episode Tyler Crispen tried to defend himself against Bayleigh’s verbal attack by saying that he’s “not a villain.” With Bayleigh’s BFF Haleigh being the new HOH, it seems likely that she’d want to target Tyler, especially since her hacking efforts last week failed. But Tyler still has a power app up his sleeve that could save him from being nominated. Will he use it tonight? Let’s find out!

8:30 p.m. – Following the HOH competition, Haleigh is absolutely pumped. She figured she would be sent home this week if she didn’t win. Tyler is a little nervous, but is happy to have the last remaining power app to keep himself off the block at either the nomination or veto ceremony. Haleigh is glad to be the HOH, but she’s well aware the hacker could ruin everything this week. Sam Bledsoe is upset that Bayleigh was evicted and admits to being the sole vote to keep her. In reality, Sam isn’t even playing the game anymore. Tyler tells Kaycee Clark that he is “over Sam” because she’s terrible for his game and is so unpredictable. She can’t be controlled and that’s a detriment to Tyler’s game.

8:32 p.m. – Earlier last week, Tyler told Sam about his power app. He hadn’t told anyone about it, but considering she still didn’t vote with him, it was a waste of his time. Haleigh tells Rockstar that Tyler is her target this week, but definitely needs to backdoor him. That leaves her with one burning question. Who will she nominate tonight?

8:40 p.m. – Angela Rummans tells Kaycee that she’s worried about Tyler going home this week. Obviously Level 6 will have at least one member on the block this week, but it doesn’t mean they will be evicted. People are starting to believe Sam is manipulating people with her emotions. Angela and Kaycee are hoping they can convince Haleigh to put Sam up as a nominee, so two Level 6 members aren’t vulnerable for eviction night. Brett Robinson hopes to charm Haleigh by kissing some ass and dropping some hints to nominate Sam. He tells Haleigh he needs to think about the jury and evicting Sam wouldn’t get much blood on her hands. Haleigh is convinced Brett is a “free agent” and has no clue he’s a member of Level 6.

8:42 p.m. – Haleigh and Angela are talking in the HOH room. Haleigh tells Angela she’s never “had it out for her.” Angela is saying whatever she needs to say to prevent two members of Level 6 being nominated, so she’s throwing Sam under the bus. Haleigh isn’t buying Angela’s argument, but considers putting Sam on the block next to her. Then Sam decides to have a private conversation with Haleigh. Sam asks Haleigh who is making fun of her. Haleigh tells Sam that Angela has betrayed her and Sam gets emotional. Sam is upset that everyone is there to “win a bunch of money.” Well duh! This is “Big Brother”! Sam is at her breaking point and is about to go off the deep end. She said if anyone makes her look dumb she will “rip them limb from limb and make them regret the day they were born.” Yowza!

8:50 p.m. – Fessy is flirting with Haleigh in the pantry and asks if she will be his girl when they leave the house. He wants her all to himself. Haleigh is attracted to Fessy, but she wants to lay low and focus on the game. She doesn’t realize that everyone else in the house already sees them as a showmance. Meanwhile, Sam tells some of the houseguests what “stomp a mud hole” means. It basically means to curb stomp someone. Sam is so dark! JC Mounduix looks mortified haha. Up in the HOH room, Tyler asks Haleigh point blank if she’s targeting him. He asks if she’s planning to put him right away or backdoor him. Why is she even listening to him? She tells Tyler she’s thinking about not putting him up. Tyler just wants to figure out if he should use his cloud app at the nominations or the Veto ceremony. At this point Tyler is becoming more and more exposed. Anyone who ignores this should plan on losing a half million dollars at the end of the summer. The man is playing the best game by a long shot.

9:00 p.m. – It’s time for the nomination ceremony! Haleigh has decided to nominate Angela and Kaycee for eviction. Tyler is relieved because he wisely chose not to use his cloud app yet. Haleigh’s target is still Tyler, but she knows Angela and Kaycee are coming for her as well. Angela said she didn’t have Haleigh on her radar, but now she’s pissed at her. Angela, Kaycee and Tyler go speak privately. Tyler tells them she wants to backdoor him but that’s a “good thing.” If they can win the hacker comp, they will be fine.

9:02 p.m. – Fessy has no idea what’s going on! He thinks nominations will remain the same if they can win the remaining competitions and has no clue Haleigh wants Tyler out of the house. Haleigh is only making one MAJOR mistake this summer. She trusts Brett.

9:20 p.m. – Kaycee immediately tells Angela she won the hacker competition. She plans to pull herself off the block. She then tells the good news to Tyler. JC goes to the HOH room to speak with Haleigh and Fessy. They all admit they were losers. Haleigh is livid. It’s time for an announcement from the hacker (Kaycee). As expected, Kaycee is removed from the block. The replacement nominee is Rockstar. That’s an interesting nomination since Rockstar is basically a non-threat. But oh well. Perhaps Kaycee just knows Rockstar is terrible at competitions and won’t win the Veto competition. That’s a wrap for tonight! Find out who wins the Veto on Wednesday. It looks like despite Haleigh being the reigning HOH, Level 6 could stay safe this week.

Why Julie Chen Moonves thinks 'Celebrity Big Brother' is 'made for Frenchie' (no, he's not on…