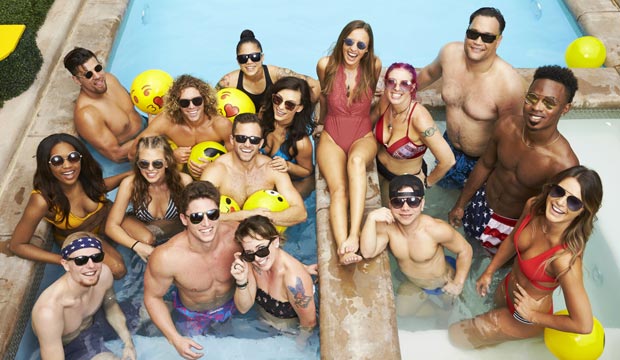 Season 20 of “Big Brother” debuted this week on CBS and already two houseguests have proven to be challenge beasts: Chris “Swaggy C” Williams won the power to reboot the game and Tyler Crispen became the first House of Household. During tonight’s episode we learned more details on this summer’s “BB App Store” twist that host Julie Chen has been teasing. Based on America’s votes, one houseguest received a coveted “Power App” while another was punished with the “Crap App.” So how’d it all play out?

SEE‘Big Brother’ 20: Which houseguests do you want to win (and lose) after episode 1 of #BB20?

Below, check out our minute-by-minute “Big Brother” recap of Season 20, Episode 3 to find out what happened Sunday, July 1. Then be sure to sound off in the comments section about your favorite houseguests, who annoys you the most, and who you think will ultimately join the “Big Brother” winners list. Keep refreshing/reloading this live blog for the most recent updates.

SEE‘Big Brother’ twist: How to use the CBS Messenger Bot on #BB20

8:00 p.m. – “Previously, on ‘Big Brother’!” On Thursday’s episode Tyler nominated Sam Bledsoe and Steve Arienta for eviction, telling the house that he wanted to keep things fair by nominating the two players who fell first during the HOH competition. While Steve has free reign of the house to try to rally votes, poor Sam’s game is hindered by the fact that she’s still a robot. Will tonight’s “BB App Store” twist have an effect on Sam or Steve’s chances? Let’s find out!

8:05 p.m. – Following Tyler’s nominations, Steve is not feeling sorry for himself and plans to show the other houseguests he is not phased at all. On the other hand, Sam is devastated. Tyler feels remorse for nominating Sam and assures her she is not the target.

8:10 p.m. – Tyler goes out on the patio and begins crying because he feels bad for nominating Steve and Sam. Oh come on! Steve actually feels sorry for him. He just put you on the block! Meanwhile, Rockstar Lantry delivers a message from Sam the Robot that she would like to be visited in the storage room. This is both sad and hilarious. One by one the houseguests pay her a visit. Kaitlyn Herman gave Sam some tough talk and told her to take herself off the block. Sam didn’t take the pep talk well and made a smart remark about Kaitlyn hopping in the hot tub with Faysal Shafaat. Not the time to make enemies Sam!

8:20 p.m. – Scottie Salton and Steve are forming a bond on the patio. A dynamic duo has formed that many may have not seen coming. Meanwhile, a more romantic bond is forming between Swaggy C and Bayleigh Dayton. Bayleigh is making fun of Swaggy for giving himself a nickname. Way to keep it real Bayleigh! She does like his “Christopher” side though and it looks like the season’s first official showmance has been formed!

8:25 p.m. – Up in the HOH room an official alliance has been formed. Level Six consists of Tyler, Angela Rummans, Brett Robinson, Kaycee Clark, Rachel Swindler and Winston Hines. Winston informs Angela she is being targeted by the other side of the house. Meanwhile, Swaggy is starting to get concerned about his relationship with Bayleigh. He doesn’t want their showmance to derail his game. Moments later they start making out in the bed. Swaggy is buggin! He runs to the bathroom and tries talking some sense into himself. He is well aware that showmances don’t work and the man in the partnership usually goes home first.

8:30 p.m. – A bird arrives in the “Big Brother” yard and Kaitlyn is convinced it is her grandfather. The universe never lets her down. Meanwhile, Sam is moping around as her robot self. The music they have chosen to play is so depressing! It makes me laugh. When Sam enters the house again as a human being, she feels like an outcast and walks around crying. She thinks everyone in the house is fake and she’s having a total meltdown in front of Swaggy and Angela. Soon more houseguests arrive try to give her a pep talk. Real talk from JC Mounduix finally seems to get through to her. He told Sam she is squandering a situation millions of people wanted to be in. Maybe she will finally stop being such a sad sac.

8:35 p.m. – Finally some action! The houseguests enter the kitchen and buckets of slop are on the table. As HOH, Tyler is responsible for choosing the first four have-nots. Like lame-o’s Kaitly, Brett, Winston and Scottie volunteered. Not only are they only allowed to eat slop, but they may only take cold showers and must sleep in three foot satellite dishes. Winston immediately regrets his decision to volunteer.

8:40 p.m. – Swaggy, Faysal and Brett are out playing pool. Faysal and Swaggy would like to form a gentlemen’s agreement to not go after each other. They want to go after floaters instead. Brett isn’t sold and is more committed to his Level Six alliance. Brett immediately informs his alliance that Swaggy approached him. Laughter ensues as they all mock Swaggy for believing he runs the house. If Steve wins Veto, Tyler plans to put up Swaggy’s closest ally in the game: Bayleigh.

8:50 p.m. – The other side of the house is working on their alliance name. F.O.U.T.E. consists of Swaggy, Faysal, Kaitlyn, Rockstar and Haleigh Broucher. But now it’s time for the new B.B. App Store! The most trending player will be granted a special power and the least trending player will win a “crap app” which could be detrimental to their game. Once a player has received an app, they are not eligible to receive another one. F.Y.I. – you don’t have to be trending for a good reason to be the “most trending.” For that reason, I’m guessing this week it’s between Swaggy and Sam.

8:55 p.m. – One at a time, houseguests are called to the BB App Store. It’s fun watching some of these self-absorbed houseguests come to realize they aren’t trending. Faysal is absolutely shocked to find out he’s the least trending houseguest. I’m actually surprised by that too. For his Crap App, Faysal chooses “Hamazon.” He will be getting regular ham deliveries he will have to consume immediately. But there’s one issue: Faysal is Muslim and doesn’t eat pork. I guess we’ll find out what happens!

8:59 p.m. – Swaggy C is devastated that he’s not the most trending player in the house. He’s furious but comes to terms with the fact that America is against him. As I predicted, Sam is in fact the most trending player. That was a much needed morale boost for her and she begins to cry. After she gets herself together she chooses the “Bonus Life” app. The power gives her or the houseguest of her choosing the chance to return to the game if evicted. It’s good for the first four evictions. But if the power isn’t used during the first three evictions, the fourth player evicted will automatically have the opportunity to return to the game. The episode concludes with Swaggy C letting America know they better get it right next week and give him more power! Sam is now in better spirits saying, “I’m 50 percent robot, 50 percent human, but 100 percent ready to play!” That’s a wrap for Episode 3.