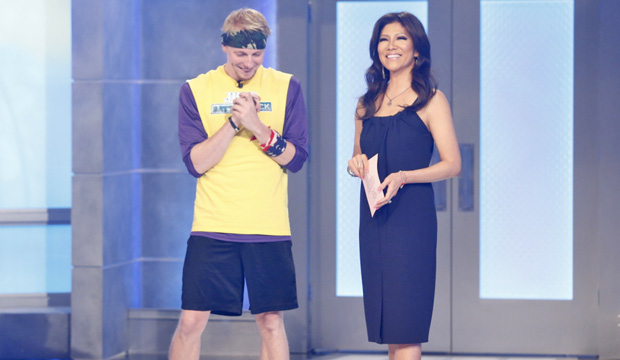 After winning the Jury Battle Back competition in Thursday’s live episode, Scottie Salton went from the jury house to the “Big Brother” house. How did the remaining Season 20 players (Tyler Crispen, Haleigh Broucher, Angela Rummans, Sam Bledsoe, Brett Robinson, Kaycee Clark and JC Mounduix) react to Scottie’s return? And who won the all-important Head of Household competition and took the key from Angela, who just last week put a target on herself by going after Haleigh and Faysal Shafaat?

Below, check out our minute-by-minute “Big Brother” recap of Season 20, Episode 30 to find out what happened Sunday, September 2 at 8/7c. Then be sure to sound off in the comments section about your favorite houseguests on CBS’ reality TV show, who annoys you the most, and who you think will ultimately join the “Big Brother” winners list. Keep refreshing/reloading this live blog for the most recent updates.

SEE ‘Big Brother 20’ spoilers: Week 10 Power of Veto ceremony preview on #BB20 and what it means for September 6 eviction?

8:00 p.m. – “Previously on ‘Big Brother’!” In Thursday’s episode host Julie Chen shocked the house by telling them it was Jury Battle Back night. Faysal, Scottie, Rockstar Lantry and Bayleigh Dayton battled in the backyard to grab balls and stack them in narrow tubes, and Scottie easily claimed victory. When Scottie re-entered the house, his fellow players (who evicted him unanimously one week earlier) shouted for joy and gave him hugs. How will the house dynamics change with Scottie back in the game? And who’ll win tonight’s HOH comp? Let’s find out!

SEE ‘Big Brother 20’ spoilers: Week 10 Power of Veto ceremony results on #BB20 and what they mean for September 6 eviction

8:05 p.m. – After Scottie returns to the game, JC is upset because he worked hard to evict him. Angela quickly brags that she evicted Fessy “for him” and she was hoping for Scottie to come back because “everyone else hates me.” Haleigh feels like she has a glimmer of hope with him back in the house, but she’s not sure where they stand. Outside during the Battleback, Fessy confessed to Scottie that JC was in his ear to evict Scottie so JC will be his top target. Brett doesn’t feel great about Scottie’s return. He hopes the next HOH contest is “throwin kegs over a poll vault” or “making out with chicks.”

8:10 p.m. – JC quickly gets to work on Angela and Brett. He tells them Haleigh is extremely happy Scottie is back in the house and one of them has to win HOH to send him packing once again. In the pantry, Haleigh tells Scottie he will probably be up on the block again next to her if they don’t win.

8:15 p.m. – It’s now time for the HOH competition! As the outgoing HOH, Angela is not eligible to compete. The game is simple: In “Pie in the Sky,” houseguests all stand on a disc attached to a hanging rope that spins in a circle. The last competitor standing will be the new HOH. As they rotate, one at a time they start smashing into a giant cherry pie.

8:25 p.m. – JC feels built for this competition. He just has to hang on and send Scottie home. Whoopsie! Down goes JC. After a few blasts of ketchup and mustard to the face, Sam is the next to fall followed by Scottie, Brett and Kaycee. It’s just down to Haleigh and Tyler. Haleigh is looking for revenge and Tyler is in it to win it for Level 6.

8:30 p.m. – At this point it’s just getting brutal. Haleigh is in tears and Tyler looks ready to vomit. Everyone on the sidelines is cheering for Tyler, giving Haleigh more fuel to stick it out for the win. Finally, Haleigh takes a blow from the waffle she can’t handle. Tyler is the new HOH! He pledges to do what benefits HIM the most this week, not Level 6. Haleigh breaks down in tears knowing she is heading back to the block.

8:35 p.m. – Scottie is cautiously optimistic he won’t be heading back to the jury house this week. Him and Tyler have always had a solid relationship and he hopes to rekindle it. Meanwhile, JC is so confident he says Tyler being HOH is basically like him being HOH this week. Haleigh is extremely angry with Sam, not because she was happy Tyler won, but she was so loudly cheering against HER. JC adds fuel to the fire, hoping to keep Haleigh and Sam gunning for each other and keeping their eyes off him. Angela goes up to snuggle with Tyler and tells him JC seems weird and he’s “a little rat.” Tyler says he doesn’t know who the bigger threat is now: Haleigh or Scottie. Tyler has Final Two deals with everyone but Haleigh, Scottie and Angela (who he can’t keep his hands off of). So, the safest deal for Tyler is probably to nominate Haleigh and Scottie.

8:45 p.m. – Kaycee and JC are in the living room sharing their “coming out” stories. It’s an emotional topic that solicits tears from Kaycee, hoping her mother will be fully okay with it one day. Meanwhile, Haleigh goes upstairs to speak with Tyler and says she obviously doesn’t want to be on the block but Tyler is in a compromised position. Is getting rid of Sam best for his game? Haleigh tells Tyler if Sam is his target, she won’t go home if she’s sitting next to her. Tyler just keeps remembering that Haleigh put him on the block earlier this summer AND cancelled his vote. Why should he save her? Scottie is next to speak with Tyler. Tyler explains to him that Fessy approached him and Angela with a Final Four deal last week and that everyone wants Haleigh gone. He tells Scottie he wants him to stay, but people are terrified of him. Scottie throws Haleigh under the bus and make Tyler believe he won’t work with Haleigh again.

8:55 p.m. – JC and Brett are feeling confident in the bedroom. They are bonding over the fact that nobody else in the house has their back 100%. They’re worried about the relationship between Kaycee, Angela and Brett. Brett runs upstairs and tells Tyler that JC is paranoid. He tells Tyler to watch how much time he spends in bed with Angela while JC is around. Tyler is getting on JC’s nerves because Tyler is impossible for him to control. JC now throws Brett under the bus, telling Tyler that Brett said Angela has him in his back pocket. Tyler tells JC to stop stressing out so much. JC’s tricks aren’t working on Tyler and Tyler may have to get rid of JC sooner rather than later.

8:59 p.m. – It’s time for the nomination ceremony!. Tyler turns his keys to reveal the faces of Haleigh and Scottie. Tyler is playing it safe this week and it’s probably his smartest move as well. Haleigh is gunning for him and it’s not a good time to ruffle feathers within Level 6. What’s crazy is that there has yet to be a serious conversation among anyone in Level 6 to get rid of Tyler! He continues to play the best game, but if Scottie turns on him, could he convince others that Tyler will win this game if they don’t evict him? Find out who wins the Power of Veto and if it is used to save Scottie or Haleigh on Wednesday!