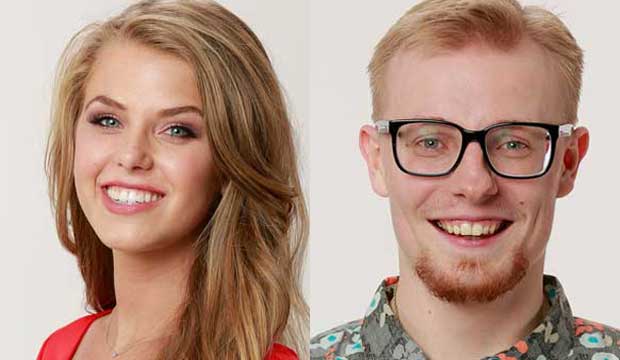 Scottie Salton has had a whirlwind week in the “Big Brother” 20 house. After being evicted by a unanimous vote, he won the Jury Battle Back competition and returned to the house, only to be nominated for eviction yet again by his BFF Tyler Crispen. Tyler nominated both Scottie and Haleigh Broucher this week, but the Veto is still in play and could save one of their lives in the game. So how did this week’s Veto competition play out?

Below, check out our minute-by-minute “Big Brother” recap of Season 20, Episode 31 to find out what happened Wednesday, September 5 at 8/7c. Then be sure to sound off in the comments section about your favorite houseguests on CBS’ reality TV show, who annoys you the most, and who you think will ultimately join the “Big Brother” winners list. Keep refreshing/reloading this live blog for the most recent updates.

8:00 p.m. – “Previously on ‘Big Brother’!” In Sunday’s episode the house celebrated Scottie’s return, but it was short-lived as the Head of Household endurance comp took place immediately afterward. Tyler stayed on his rope swing the longest, so he won the power to nominate two people for eviction. Since Tyler already had final two deals with Angela Rummans, Sam Bledsoe, Kaycee Clark, Brett Robinson and JC Mounduix, the only people he could safely nominate were Haleigh and Scottie. If the Veto is used tonight, will Tyler have no choice but to backdoor JC, who’s been playing the game too aggressively? Let’s find out!

8:10 p.m. – Following the nomination ceremony, Tyler confirms he would rather see Haleigh go this week but hopes to keep both the nominees calm. Haleigh is very annoyed but has survived and adapted every day in the house so far. She’s determined to stay. Tyler whispers into Scottie’s ear that he’s just a pawn. Over in the bedroom, Scottie and Haleigh discuss why they keep losing. They both have a tendency to f*** up. Haleigh tells Scottie that she thinks Tyler, Brett, Kaycee and Angela have a four-way alliance. Next, Haleigh runs upstairs to speak with Tyler. She asks him blatantly if she’s the target and his response is, “I don’t decide who is the target.” You’re the HOH Tyler! Of course you decide who the target is. Haleigh knows she has to win the Veto to keep herself safe. JC is the next houseguest to pay a visit to Tyler in the HOH room. JC thinks he’s been controlling who goes up on the block and who goes home each week. He tells Tyler things will become difficult when they are down to five people. He then tells Tyler he seems “weird” lately. Suspicions are rising! Tyler can see through JC’s tricks.

8:20 p.m. – Things must be getting boring in the “Big Brother” house because Sam has decided to straighten Tyler’s hair. She whips out her flat iron and gets to work. The houseguests have a good laugh at he results. He says, “I look like Joe Dirt and Kidd Rock had a baby!” Next we get a view of Tyler and Angela cuddling up in the HOH room. Gross. I hate showmances. Houseguests keep interrupting their snuggle sessions which is fine by me. I have no desire to watch these two make out the rest of the season. Alas, night comes and with no interruptions and they finally get it on. Time for the Veto competition!

8:21 p.m. – It’s time to pick players for the Veto! Joining Tyler, Scottie and Haleigh in the Veto competition are Kaycee, Sam and JC. Haleigh can’t count on anyone to take her off the block and knows she has to do it herself.

8:30 p.m. – Sam is feeling irritable in the kitchen. She’s “over it.” Angela consoles her, but admits in the Diary Room she’s is sick of Sam’s emotions. A series of clips shows Sam getting annoyed by everyone, cleaning and crafting. She blames quitting smoking for the fact that she’s about to snap. Sam yelling at JC was the highlight, when she told him to jump off the balcony so she can catch him, “you little son of a bitch.” Meanwhile, Kaycee tells Haleigh she can sleep with her if she feels lonely. Haleigh apologizes to Kaycee for how Faysaal Shafaat acted in his final days. She decides it would benefit her game to sever ties with him (game wise) and blame him for everything they had done to anger people throughout the summer. Kaycee seems to genuinely care for Haleigh and thinks Scottie is still the target.

8:35 p.m. – It’s time for the Veto competition! Brett is serving as host, dressed like a giant emoji. In this competition, players must walk across a see-saw and drop emojis off in their “message bubble” one at a time. The first player to get all of their emojis into their message bubble and race back to hit their buzzer will win the game. If the emojis hit the ground at any time players must start over. At this point, JC and Kaycee have both mentioned wanting Scottie to go home, while Tyler wants Haleigh gone. It would be huge for either of them to take themselves off the block at this point.

8:45 p.m. – This may sound like an easy competition, but there are a TON of emojis and they are very bouncy. Various players have had to start over already. Scottie is awful at this game. It’s neck and neck between JC and Tyler for the lead with Kaycee right behind. Kaycee is starting to find her rhythm in this game and is about to catch Tyler. Tyler is in the lead, but it’s getting difficult for him control his board. Suddenly, Tyler has to reset. Demoralizing! It now looks like it’s between JC and Kaycee.

8:53 p.m. – After flirting with disaster while her emojis hang over the ledge of her text box, Kaycee finally finishes the task and hits her buzzer. For the second week in a row, Kaycee has won the Power of Veto! Neither Scottie or Haleigh think they will go home this week and by the sounds of things, the other houseguests don’t seem to agree either. Up in the HOH room, Tyler tells Haleigh not to freak out. She tells him she won’t come after him and it won’t benefit Tyler for her to leave. He tells her she’s not the target, and it sounds like the rest of the house wants Scottie to go home now. Haleigh says Tyler lives in a bush and all he does is beat around it. He says nothing of content.

8:55 p.m. – Out in the hammock, Scottie tells Haleigh that Tyler told him he’s a pawn. Haleigh goes inside and begins crying and Kaycee comes to console her. Haleigh says Scottie told her he was the pawn. Kaycee says Scottie doesn’t really know what’s going on. Haleigh then proceeds to throw Scottie under the bus.

8:59 p.m. – It’s time for the Veto ceremony! As expected, Kaycee has chosen NOT to use the Power of Veto. Either Haleigh or Scottie will be joining the jury Thursday night. Tyler wants Haleigh to go home, but Level 6 as a whole wants Scottie to go. At this point, I’d bet on Scottie going home. He’s a bigger challenge threat. We’ll find out tomorrow on CBS!