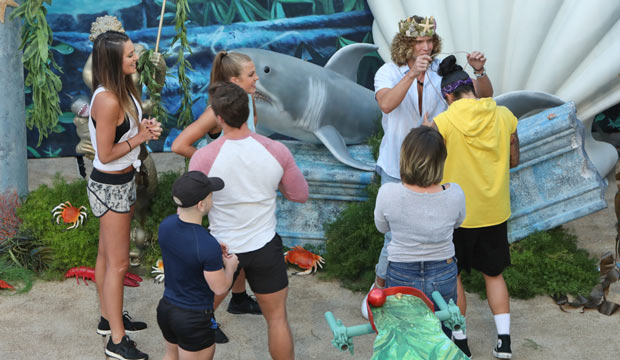 After poor Scottie Salton was evicted unanimously from the “Big Brother” house … for the second time … the remaining players took to the backyard to compete in the live Head of Household challenge. In a true nail-biter, Kaycee Clark defeated Brett Robinson by sinking her three pearls in her oysters one second faster, so she became HOH for the first time all season. Which two houseguests did Kaycee decide to nominate for eviction? And does anyone suspect that this week will feature the first Double Eviction of Season 20?

SEEWith only 8 ‘Big Brother’ houseguests left, who do YOU think is the biggest floater of Season 20? [POLL]

Below, check out our minute-by-minute “Big Brother” recap of Season 20, Episode 33 to find out what happened Sunday, September 9 at 8/7c. Then be sure to sound off in the comments section about your favorite houseguests on CBS’ reality TV show, who annoys you the most, and who you think will ultimately join the “Big Brother” winners list. Keep refreshing/reloading this live blog for the most recent updates.

8:17 p.m. – “Previously on ‘Big Brother’!” In Thursday’s episode Haleigh Broucher was saved when the house voted unanimously to evict Scottie. With both Scottie and Faysal Shafaat in the jury house, that means Haleigh is now truly alone in the game. Elsewhere in the episode Tyler Crispen‘s allies, particularly JC Mounduix and Brett Robinson, started to get suspicious of his showmance with Angela Rummans. So who will Kaycee nominate for eviction tonight? Let’s go!

825 p.m. – Brett is frustrated that he didn’t win the HOH because he wanted to stir the pot and make some moves this week. More than likely he will be safe regardless, but Haleigh is certain she’s heading back to the block. Sam is talking to herself on the couch and feels lonely in the house. Meanwhile, Kaycee and Angela think the best move this week will be nominating Haleigh and Sam. Level 6 is SOLID.

8:30 p.m. – Kaycee received a heartwarming letter from her brother that turned her into a puddle of tears. After she composed herself, she says it has fueled her even more to go after that $500,000 prize.

8:35 p.m. – Angela and Tyler are snuggled up talking about Angela’s keen sense of smell. Must be a slow week in the “Big Brother” house! Angela could smell what Kaycee was cooking all the way from the Diary room. She said Haleigh smells great and Sam smells like her grandmother. Of course her favorite smell is Tyler. Meanwhile, Kaycee is thinking about how she can break the news to Sam that she’s going on the block as a pawn.

8:40 p.m. – Brett takes it upon himself to go talk to Sam. He tells her if she happens to go up as a pawn, she should remain calm. She said she will be fine and then goes and talks to Kaycee. Up in the HOH room, Kaycee reveals to Sam that Haleigh is her target. Next, Haleigh comes to pay Kaycee a visit. Haleigh tells Kaycee “you have me” about 100 times. Even though she’s nominated Kaycee twice. This conversation is going nowhere. Haleigh is probably going home this week.

8:50 p.m. – Season 18 champ Nicole Franzel walked in the house to host today’s “Luxury Competition.” She couldn’t find anyone since they were all up in the HOH room. Then, Victor Arroyo appeared on the monitor to tell her she wasn’t really there to host a competition. Nicole bursts into tears as Victor talks about their relationship. Victor then emerged from around the corner with a fresh new haircut! He got down on one knee and proposed. Nicole said “Yes!” Honestly, “Big Brother” has probably produced more successful relationships than “The Bachelor.” Congrats to the future Mr. and Mrs. Arroyo! Ding Dong! The doorbell rings. Who else could be at the door?

9:00 p.m. – “Big Brother” royalty Derrick Levasseur, Paul Abrahamian, Josh Martinez, Britney Haynes and Daniele Donato arrive to congratulate Victor and Nicole. Then, the Season 20 cast is finally allowed to come downstairs and join them. They are geeking out over all the iconic figures in the room. After champagne and cake is served, the former cast members leave and let the Season 20 crew resume their dud of a day.

9:10 p.m. – JC is showing off his hula hooping skills. There is NOTHING going on this week. Wow! We are hearing about Angela’s athletic background. She blames her gymnastics career for breaking up her family and pushing down her emotions. At 17 she quit gymnastics and started pole vaulting. Meanwhile, a persistent Haleigh tries talking to Kaycee in the HOH room one more time. Kaycee informs Haleigh she will be on the block, but lies and said she has no real target. Haleigh starts crying, but Kaycee is keeping her eyes on the prize. Sorry Haleigh.

9:20 p.m. – It’s time for the nomination ceremony! As expected, Kaycee nominates Haleigh and Sam for eviction. Kaycee says she loves both of them, but Haleigh put her on the block twice and Sam voted against the house twice. Sam says if this is all a trick and she is evicted on Thursday, she will rip the doors off the hinges on her way out and rip these bitches to shreds. Unfortunately, we most likely won’t get to see that play out. Haleigh is almost certain to go home unless she can pull out a win at the Veto competition. That’s a wrap for tonight!