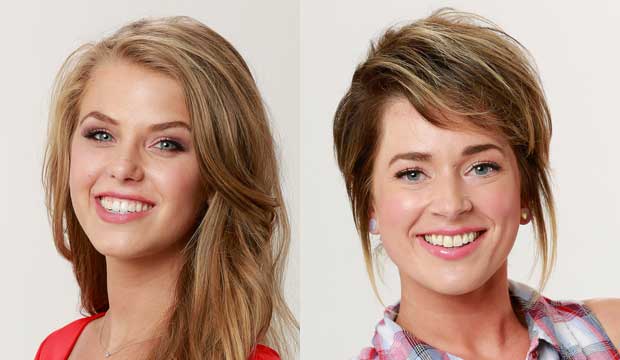 With only seven players left in the “Big Brother” 20 house, Haleigh Broucher and Sam Bledsoe are outcasts in a game dominated by the remaining members of the Level 6 alliance. Tyler Crispen, Angela Rummans, Kaycee Clark and Brett Robinson, plus honorary member JC Mounduix, have controlled the vote for the entire game. The only thing that can save Haleigh or Sam this week will be the Power of Veto, so how did tonight’s all-important competition play out?

Below, check out our minute-by-minute “Big Brother” recap of Season 20, Episode 34 to find out what happened Wednesday, September 12 at 8/7c. Then be sure to sound off in the comments section about your favorite houseguests on CBS’s reality TV show, who annoys you the most, and who you think will ultimately join the “Big Brother” winners list. Keep refreshing/reloading this live blog for the most recent updates.

8:00 p.m. – “Previously on ‘Big Brother’!” In Sunday’s episode the house reacted to Scottie Salton being sent packing … for the second time. As the showmance between Tyler and Angela got hot and heavy, Head of Household Kaycee decided to nominate Haleigh as her target and Sam as her pawn. Unfortunately, Sam didn’t take the news very well and went into a vulgar tirade in the Diary Room that included threats to “rip these b*****s to shreds!” Will Sam cool down enough to win the Veto and save herself from eviction? Let’s go!

8:05 p.m. – Following the nomination ceremony, Kaycee maintains that Haleigh is her main target. No matter what, Kaycee is staying loyal to Level 6 and plans to ride it out to the final four. Sam is upset to be nominated but promises not to lose her s***. Haleigh is determined to win the Power of Veto and isn’t sulking. Tyler heads to the pantry to comfort Sam, but she promises him she’s okay. Tyler can read between the lines though, and is hoping Sam doesn’t blow it and get voted out. Haleigh is hoping Sam will lose her cool and become a bigger target than her.

8:10 p.m. – My favorite duo left in the house, JC and Brett, are talking in the bedroom. After Brett asks JC for some advice about his hair, they quickly change to game talk. They’re curious how Sam will handle being on the block and are convinced she will work herself up. JC says if Haleigh comes down, him or Brett will be the replacement nominee. They NEED to win this Veto. Up in the HOH room, Tyler and Kaycee are catching up. They just want to win the Veto, but in the worst case scenario Kaycee will put up JC as the replacement nominee.

8:20 p.m. – A meeting is called in the living room. The houseguests are surprised with some videos from their loved ones at home. Things clearly got emotional and even Angela cried. It was upsetting for JC to see everyone receive videos from their families, but he doesn’t have a good relationship with his. Instead, a friend left him a message, which resulted in viewers seeing a rare sensitive side of JC.

8:25 p.m. – JC and Brett share some grapes as they sunbathe outside and discuss how great they look. JC is happy to have another bromance in the house since his “big dumb puppet” Faysal Shafaat was evicted. Brett acknowledges the duo is tight and he can’t imagine life without JC as a friend. They like comparing nipples and having fun, but also know one of them could be going sooner rather than later.

8:27 p.m. – It’s time to pick players for the Veto competition! Joining Kaycee, Haleigh and Sam in the Veto competition are: Tyler, Angela and Brett. Only JC will be sitting this one out. He quickly gets to work telling Tyler that Brett should be the replacement nominee if Haleigh or Sam wins the Veto. He throws Brett under the bus and says if Brett had won HOH he would have come after Tyler and Angela. Tyler is suspicious of Brett, but also knows JC plays head games. JC says everyone in the house is talking about Tyler’s relationship with Angela and everyone knows he would never put her up. He reiterates that Angela needs to go on the block with Kaycee and Tyler is annoyed. Tyler wants JC to go up as the replacement nominee if the opportunity presents itself.

8:52 p.m. – It’s time for the Veto competition! This week is the annual superhero competition. Players will have to correctly find “evil impostors” that does not match their comic book color. They have to knock down the five impostors in the fastest time to win the Veto. Despite Brett’s entertaining commentary, Kaycee was the player that shredded the competition, winning her third Veto in a row! The woman is on a tear and she’s definitely peaking at the right time in the game. Tyler may need to re-think his final two deal with her. She can win.

8:55 p.m. – Haleigh feels embarrassed and stupid for not only losing the Veto competition, but probably the game of “Big Brother.” Tyler and Kaycee are laughing it up in the HOH room before Tyler confesses that JC told him to go after Kaycee and Angela. Tyler hates JC’s confidence that he has Brett in his back pocket. At this point Brett is sounding like a potential nominee, if not the number one option to send home on double eviction night.

8:59 p.m. – As expected, Kaycee chose NOT to use the Power of Veto. Unless Sam has an epic breakdown, Haleigh is almost certain to be the first player evicted during Thursday’s double eviction episode. But who will be the second? Find out tomorrow night on “Big Brother!”